The Penguins have signed Hobey Baker finalist and Hockey East player of the year Paul Thompson.

The Penguins have inked Hockey East player of the year and 2011 Hobey Baker Award finalist, Paul Thompson to a two-year entry level contract.

Here are the specifics on Thompson from the Penguins release: 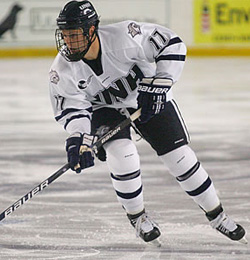 Thompson, who attended the Penguins development camp in 2010, just completed his fourth season of collegiate hockey with New Hampshire. He was named the 2010-11 Hockey East Player of the Year after posting a league-leading 52 points in his senior campaign.

Thompson (6-foot, 210 pounds) also scored 28 goals this season, which ranked second overall in the Hockey East. He helped the No. 11 Wildcats advance to the NCAA Regional Finals before falling to No. 9 Notre Dame, 2-1, Sunday.

A scout from hockeysense.ca had this to say about Thompson:

He has really improved his skating in his time at the University of New Hampshire and he really seems to find the open ice in the offensive zone.

Ray Shero and company have a good history when it comes to signing undrafted college free agents (Brad Thiessen, Ben Lovejoy, John Curry etc) so it will be interesting to see how Paul Thompson fares.

From the looks of his statistics and his pedigree, it looks like he will be a nice addition to the organization. Especially when you consider that the one area that needs beefing up is the wing.