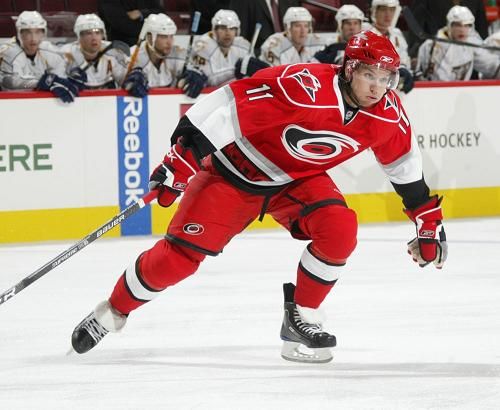 The Penguins claim forward Zach Boychuk from the Carolina Hurricanes.

Boychuk is a former first round draft pick (14th overall ’08) and spent the majority of the season with the Charlotte Checkers of the American Hockey League. He is a skilled player, who hasn’t quite been able to crack the Hurricanes’ line-up, though he has played in 73 NHL games notching 18-points (7g,11a).

Coach Dan Bylsma addressed the acquisition in his pre-game comments this afternoon:

“He’s a guy who, first round pick, he’s got speed to his game and he’s got limited NHL experience, but he’s going to add some competition in our line-up. He could see time on Malkin’s line, on that wing, adding that speed and a little bit of grit to that line.”

Intriguing words from the coach there, as Boychuk just might be the under-the-radar move the Pens’ needed to inject some much needed skill into their wing ranks. Beyond James Neal, Chris Kunitz and Pascal Dupuis, the Penguins’ wings are largely interchangeable.

We like the move, as sometimes a change of scenery can be just the thing a guy needs to get over the hump. No word on if he’ll be in NYC for this evening’s game.

Per this Rob Rossi article, Ray Shero sees Boychuk playing Saturday when the Pens face the Devils at the CONSOL Energy Center.

Ray Shero seems to be taking a “Why Not…” “Wait and See” approach to the situation. His actual quotes in the Rossi piece that’s linked above.

Tomas Vokoun will start this evening.

Robert Bortuzzo will skate in his first game of the season.

Ben Lovejoy is cleared to play, but Bylsma wasn’t definitive in saying if he would be in the line-up. We’re guessing that Bortuzzo slides in to his spot.

Kunitz was feeling “under the weather” and should be able to go this evening.

Official Release from team on Boychuk:

The Pittsburgh Penguins have claimed forward Zach Boychuk off of waivers from the Carolina Hurricanes, it was announced by executive vice president and general manager Ray Shero.

Boychuk, 23, has spent the majority of this season with the Charlotte Checkers of the American Hockey League (AHL) – the top minor-league affiliate of the Hurricanes. Boychuk was leading the Checkers in scoring with 32 points (16G-16A) in 37 games played. He also appeared in one NHL game this season with Carolina.

Originally drafted by the Hurricanes in the first round (14th overall) of the 2008 NHL Draft, Boychuk has played parts of the past five seasons with the Hurricanes, tallying 18 points (7G-11A) in 73 career regular-season games. His best season at the NHL level came in 2009-10, when he notched nine points (3G-6A) in 31 games.

The 5-foot-10, 185-pound Boychuk has spent most of the previous four seasons playing in the AHL for Charlotte and the Albany Rivers Rats. Boychuk’s best AHL season was ’10-11, when he established career highs offensively with 22 goals, 43 assists and 65 points in 60 games.

A native of Airdrie, Alberta, Boychuk played four seasons of junior hockey with the Lethbridge Hurricanes of the Western Hockey League (WHL) between 2005-09. Boychuk represented Team Canada in back-to-back World Junior Championships in 2008 and ’09, earning a gold medal both years. He served as an alternate captain for Canada in ’09.