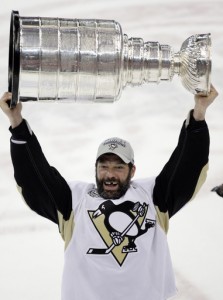 Guerin who came to the Penguins in a trade with the New York Islanders during the 2009 season and went on to win a Stanley Cup with the team made an immediate impact on the organization with his tell it like it is attitude and leadership. He will be able to utilize those skills in his new role.

The birds gave Guerin a tryout of sorts in the position last season upon his retirement as a player. He spent time shadowing assistant to the general manager Tom Fitzgerald and things must have clicked.

In his new role, Guerin, 40, will be responsible for working with young prospects throughout the Penguins’ organization – assisting in the development of players in the minor leagues as well as junior and college hockey.

“Billy has only been retired as a player for one year, so he brings a new and very contemporary perspective to the position,” general manager Ray Shero said.  “He is going to be a big asset to our young prospects throughout the organization, and to our staff.”

The 6-foot-2, 220-pound right winger played 95 games for the Penguins over the final two seasons of his career before retiring in 2010. He was an essential part of the Penguins’ 2009 Stanley Cup championship after being acquired at the March, 2009 trade deadline.

Guerin also played for the New Jersey Devils, Edmonton Oilers, Boston Bruins, Dallas Stars, St. Louis Blues, San Jose Sharks and New York Islanders in a career that spanned from 1991-92 through 2009-10. He broke in with the Devils and won a Stanley Cup there in 1995.