The Penguins have re-signed forward Craig Adams to a two-year contract. 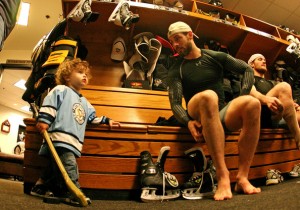 Craig Adams may not be the flashiest player on the ice, nor will he score a ton of goals, but he will tenaciously kill penalties and work his tail off in the corners. He is the type of player that a team can win championships with, as the Penguins and Carolina Hurricanes proved in 2006 and 2009 respectively, and he will be plying his trade with the Birds for two more years.

The Penguins today announced that the team has re-signed Craig Adams to a two-year contract worth an average annual value of $675,000.

Adams, who led the team’s forwards with 3:05 shorthanded minutes per game, helped the Birds become the No. 1-ranked penalty killing unit in the NHL in 2010-11 with a success rate of 86.1 percent – the first time in franchise history the Penguins boasted the league’s top PK.

Adams played four seasons at Harvard University (1995-99). He totaled 29 goals and 62 points in his collegiate career.