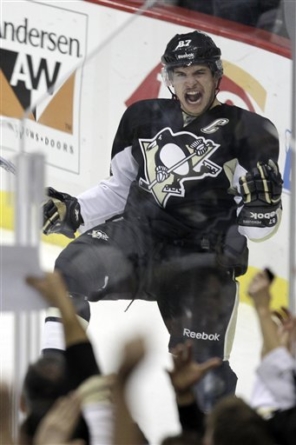 Sidney Crosby is expected to ink a 12-year $104.4 million contract on Sunday.

The speculation started running wild on June 9, 2012 when Elliotte Friedman of CBC Sports reported that the Penguins were on the verge of agreeing to terms on a monster new contract with Sidney Crosby that would pay him something in the range of $9 million per season, a modest raise on his current yearly salary of $8.7 million.

TSN’s Darren Dreger reported much the same thing this morning saying that the contract would pay Crosby “over $100 million dollars with an AAV of close to $9 mil per” and would be formally announced on Sunday.

Pierre Lebrun, of ESPN, got in on the act via his twitter account with some specifics from Crosby’s agent Pat Brisson, saying that Brisson confirmed that “the deal will be $104.4 million over 12 years.”

There was no question that the Penguins and Crosby would come to terms on a new deal, as he is and has been the face of the franchise. That is so even after Evgeni Malkin’s monster season that saw him secure the Art Ross, Hart and Lindsay awards last week in Las Vegas.

If there were any questions surrounding the deal, they were all health related. Crosby’s concussion issues are stranger to no one, but he does look to have overcome those issues and the Penguins’ medical team must agree as term might have been an issue in these negotiations otherwise.

There is a good chance that this contract might have been signed regardless as Crosby has proven to be one of, if not the best player on the planet when healthy and has become the fact of not only the Pittsburgh Penguins, but the National Hockey League.

The good news about this deal is that the parameters will be in place to ink a similar pact with Evgeni Malkin, who the Penguins would likely keep long term now that Jordan Staal has moved on, just as they did when the duo inked identical $8.7 million deals during the last go round.

Like Mario Lemieux before him, this deal probably locks Crosby in as a lifer in Pittsburgh. That was obvious from the first day he stepped foot into town and moved into the latter’s home. Like Lemieux, he helped save the franchise and joined forces with Le Magnifique to get the shiny new CONSOL Energy Center built. That fact alone would be enough to keep him here for the duration of his career and it just might be enough to keep him here beyond his playing days as well.

It wouldn’t be a huge shock to see Crosby hang around Western Pennsylvania once his Penguins’ career comes to a close, in fact who’s to say that he won’t stay seated at the right hand of Lemieux and buy an ownership stake in the team that he helped save? Time will tell… but as far as today goes, the Penguins will have the face of their franchise for at least the next 13 years.

The Pittsburgh Penguins have agreed to terms with Sidney Crosby on a 12-year, $104.4 million contract extension that will keep Crosby with the team through the 2024-25 season.

The extension calls for an annual cap hit of $8.7 million.

Under the Collective Bargaining Agreement, the new deal cannot be signed until July 1.

“This is a great day for hockey and tremendous news for the Pittsburgh Penguins and our fans,” co-owners Mario Lemieux and Ron Burkle said in a joint statement. “We are grateful for all that Sidney Crosby has done for our franchise since coming to Pittsburgh in 2005, both on and off the ice, and we look forward to having him in a Penguins uniform for the rest of his career. He is an excellent player and an even better person, and he is a great ambassador for the Penguins and for Pittsburgh.”

Crosby led the Penguins to the Stanley Cup in 2009 – becoming, at age 21, the youngest captain to hoist the Cup in NHL history. He also has won the Hart Trophy as MVP, the Art Ross Trophy as league scoring champion, the Rocket Richard Trophy as goal-scoring champion and the Ted Lindsay Award as most outstanding player in his seven NHL seasons. In 434 games he has registered 223 goals and 386 assists for 609 points. He has added 90 points in 68 playoff games.

“In an era when players often move from team to team, it’s gratifying to see a young man who is so committed to one city and one franchise,” said David Morehouse, CEO and President of the Penguins. “He’s meant so much to the Penguins, to the growth of youth hockey in Pittsburgh, and to the NHL and the game of hockey in general. It’s a tremendous feeling to know he’ll be here through 2025.”

“He’s a very special player and knowing that he will be here long-term is outstanding news for our players, coaches, staff and fans,” said Ray Shero, the Penguins general manager. “Sidney also brings those extra dimensions as our captain, with his leadership in the room and on the ice. We’re all very excited to reach this agreement on an extension.”