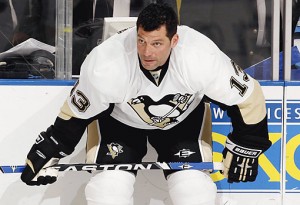 The Penguins have had to deal with this situation several times over the years with the likes of Bryan Trottier, Gary Roberts and now again with Bill Guerin. According to multiple reports Ray Shero finally came to a decision, albeit a tough one, and informed Guerin of his intention to walk away.

Once the team signed Arron Asham all involved knew that it would be tough to fit Guerin under the cap paying him anywhere close to the money that he received last season. Then word started to circulate about the fact that Billy G was more than willing to accept a low ball offer to return… it wasn’t enough to convince Shero to bring him back.

Sure he is still a very capable leader and a huge asset in “the room,” but his play started to diminish during the second half of last season and after a burst in the first round of the playoffs his tires seemed to lose all their tread.

Personally I think that Guerin still has a bit left in the tank…maybe as a power play specialist or as a stop gap forward on a team’s top six, but that won’t happen in Pittsburgh.

It is always tough to see a career wind down, especially one as storied as Bill Guerin’s, but it happens to the best of them. He was a vital piece of the Championship puzzle here two years ago and that solidified his spot in the aforementioned Penguins lore. Personally I will never forget what he did for Sidney Crosby; his work with the Penguins captain helped the young superstar become a better leader on and off of the ice. We will all be reaping the benefits of that for years to come.

Speaking of Crosby, it will be interesting to see how he reacts to losing Bill Guerin. Though he is no stranger to losing teammates, he and Guerin had become good friends.

One interesting tidbit to consider here is this… if Guerin is still unsigned come January, is he someone you would consider bringing in? He would be well rested and showed last year that he could be capable of producing a pretty effective half a season – even at this stage of his career. Without the grind of 82 games, he could be a nice late get to add depth… just a though…