The Penguins have resigned forward Tyler Kennedy to a 2-year, $2-million dollar deal. 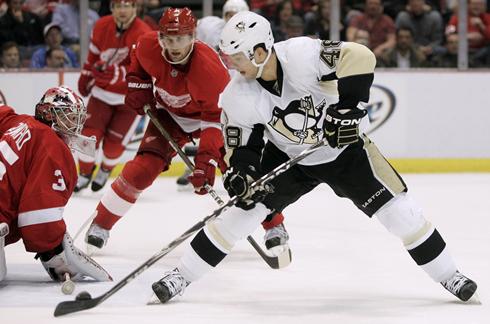 The Penguins have re-signed forward Tyler Kennedy. Though his signing wasn’t an either or situation with that of Jaromir Jagr, it is worth noting that he signed a deal that is awfully similar to that of the one that was just pulled out from under Jagr.

Though Kennedy isn’t the sexiest of wingers, he did have a career year last season and was one of the only Penguins forwards to seemingly take it to another level during January and February following the losses of Sidney Crosby and Evgeni Malkin. Kennedy sort of transformed his game a bit during this period of time and it paid off for him. He stopped just playing off the boards and out of the face-off dot and started getting to the net. His crashing the net and gathering rebounds was something that we hadn’t seem before and frankly it looked good on him.

Though Dan Bylsma has spent a good deal of time praising Jagr over the past week, he has also been talking an awful lot about using Kennedy on the power play. Maybe he is the missing link? Bylsma certainly thinks that he will be an asset to his new look extra man units during the coming season.

As we wave good-bye to Jaromir Jagr for hopefully the final time, we welcome TK back into the fold.

Here is the official release from the team.

The Pittsburgh Penguins have re-signed forward Tyler Kennedy to a two-year contract, it was announced today by executive vice president and general manager Ray Shero.

Kennedy’s contract will run through the 2012-13 season and has an average annual value of $2 million.

Kennedy, 24, is coming off the best season of his four-year career after establishing single-season highs across the board in games played (80), goals (21), assists (24), points (45) and power-play goals (7). In seven postseason games, Kennedy added two goals and one assist.

A Sault Ste. Marie, ON native, Kennedy was a valuable member of the Penguins’ 2009 Stanley Cup championship squad, contributing five goals, four assists and nine points in 24 postseason contests. Three of Kennedy’s goals that spring were game-winning tallies – including Game 6 of the Stanley Cup Final against Detroit.