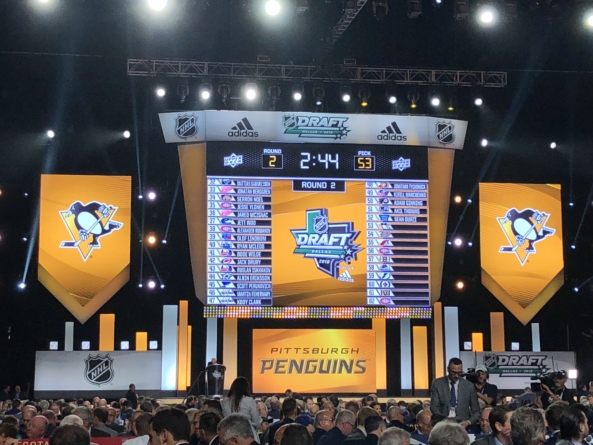 The Penguins entered the Draft in Dallas with six picks but only used four of them. There might not be much quantity, but the organization is very happy with the quality of those players they selected.

“I think with the picks we had we did really good,” he said. “We’re really excited about the four players we picked for the organization. Everybody is on a different path, some of them are more long-term guys but I think we really like everyone we were able to get.”

Allvin took some time to break down his picks on Saturday. Here are some of his thoughts on each.

PA: “You look at the style of play that the NHL is right now; you need defensemen to be quick down to get the puck up. He’s a great transitional defenseman. He’s a smaller defenseman but he skates so well and he’s really impacting the offensive game too”

PA: “We watched Filip a lot during first half of the year. Unfortunately he had a little bit of a knee problem here in the second half, but that’s why he might have slid a little bit. He’s just a solid two-way player. He has those character traits like Patric Hornqvist. He goes to the hard areas and he produces. It was a great year for him being on a pro team, moving up to the top league in Sweden. He’s going to be on the Swedish World Junior team… we felt he fits what were kind of looking for in a player.”

PA: “Justin went through the draft. He’s such a competitive player and just finds – for a smaller guy – he finds the hard areas and he gets it done. He produces. The way he played this year will just show that he has another level to go.”

PA: “Liam is a little more of a long-term project. He’s going the college path, but we’re intrigued by his size and the way his speed is. I thought it was a great sixth round pick. Credit to all of our scouts putting the list together. We didn’t have many picks, but we did well with the picks we had.”