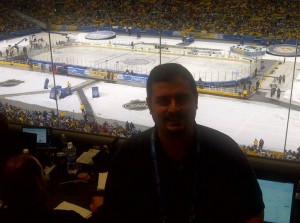 Born and raised in Pittsburgh, Pennsylvania, Brian Metzer has been covering the Pittsburgh Penguins and National Hockey League since 2004. He is the host of Penguins Live and co-host of PensWeek on the Penguins Radio Network, serves as the Pittsburgh Penguins correspondent for NHL Network Radio on SiriusXM, does similar work for TSN 1050 in Toronto, is a contributing writer for NHL.com, the Beaver County Times and is the primary contributor for this site www.fromthepoint.com.

Over the years Metzer has covered three Stanley Cup Finals, an Olympic Hockey Tournament and hundreds of National Hockey League games including a Winter Classic (’11), multiple NHL Drafts and an All-Star Game (’11).

Metzer’s work has been seen on countless websites, podcasts and other new media platforms and he makes regular appearances on radio programs in Pittsburgh, around the country and in Canada.

Metzer can be found wandering the halls of Consol Energy Center on any Penguins game day, prowling the streets of West View or Bloomfield, Pa in search of Sam Adams product or watching Scrubs reruns. He loves all forms of media, is a gadget junkie and is one of the most approachable guys you will ever meet, so say hello!