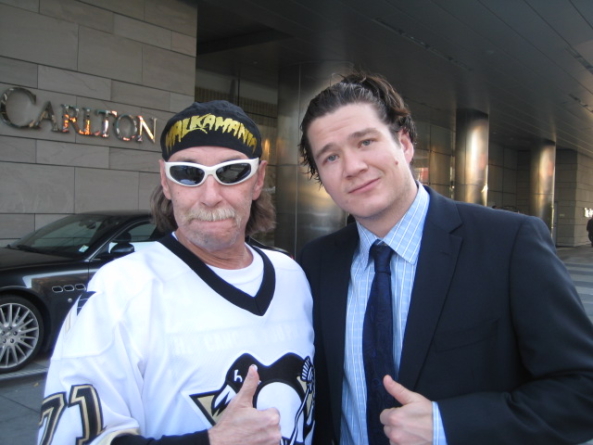 Cy gives us a run down of his trip to LA and his face-to-face with an old nemesis — Mike Richards.

Now how many times have we sung these lyrics in our lifetimes?  I’m sure I have a lot more than most of the readers.

“Driving down your freeway.”

Well, after all that has transpired in my life, I got to go to L.A. to see the Pens play the Kings. I also got to see my good buddy ‘Mrs. McGuire,’ I mean Mike Richards, the L. A. Woman.

I had a great time with my friends Amy Balla, Pat McManus, Bruce Kubitz and his dog Buffy.  I was hooking up with the three of them in L.A. since they were already on the West Coast for the San Jose game and traveling down.  The plane ride was nice, I slept most of the way but I noticed something as I was getting off the plane, a dead phone battery.  Luckily, with no problem I found my way outside to find Bruce waiting for me.  These phone batteries are terrible; my phone had a full charge before I left.

From the airport we went to Beverly Hills, and yes I could hear that ‘90210’ theme, and look, there goes Dylan, and the Peach pit.  Then we hit Rodeo Drive, why did I have the urge to knock off Jose Eber’s hat?

From there it was a trip past the Whiskey a Go Go… the Doors again, yep they played there.  From there we went to Thousand Shakes, where I proceeded to drop mine. Then it was back to the hotel.

On game day, we went to see the players in the morning.  We caught Brooks Orpik, ‘Big Mac,’Brent Johnson, Kunitz, Jeffrey and Letestu.  Also ran into Dan Potash, Mike Lange, ‘The ole 29er’ and Errey.  Stopped to say our pleasantries to the Gretzky sign, then off we went to the famous Hollywood sign.

Of course we got photos of the sign and then posed for shots with it.  Hopped back in the car and had just enough time for the Hollywood Walk of Fame, and yes, we saw the Doors star among the others.

We had time for an “In N Out” Burger and then a little rest before the game.

We were running a little late heading to the Staples Center but we were able to catch Joe Vitale, Arron Asham and the Flower himself.  Then it was off to the ESPN Zone and we walked part of the way with David Morehouse.  We ended up waiting over an hour for our food, and I was not prepared to have spices added to my cheese quesadillas.  It was a bad time there, as my throat was not cooperating.

Finally we were off to the game.  Inside the building I met up with Yannick Mivsek, a Pens fan from Quebec, and Eric Naughton, a fellow cancer survivor who is originally from these parts but is now living in L.A. From there it was a short interview with Sam Kasan (Penguins’ Director of Content) which was interrupted by a Dennis Blunden from Head of The Class wanna be. Let’s just say that I reminded him of the number of Stanley Cups that the Kings have won. Definitely a fan base that should not be taunting. Then I got to see and shake hands with Coach Bylsma before the game as well as a hello to Dan Potash as he laughed at my jerseys.

Then the moment of truth……

Finally the Penguins and Kings hit the ice for warm-ups. Seems that it took a few turns around before our buddy got a glimpse, but when he did, he looked.  What was running thru his mind?  “There is that creepy Hulk Hogan guy again?” You’re damn right baby, back with a vengeance!  And It’s good to see you again too Mrs. McGuire.  Even the L.A. fans were laughing at the jerseys.  They would not do that in Philly.  It was also good to know throughout that game we’d catch him looking over and looking from the bench, just like old times huh Mike?  And to blow that penalty shot…..

I’m not gonna go into to the details of the game, you know the score, you know what happened. But it’s nice to travel all that way to see them get 2 points.  It was an uneventful flight back to the Burgh and I came home to my dog, Geno, going nuts.  Oh, and yes, once again my cell went dead and would not charge.  My battery needed replaced after 1 month.  I will leave you with some pics from the trip take care till we meet again on Thursday.