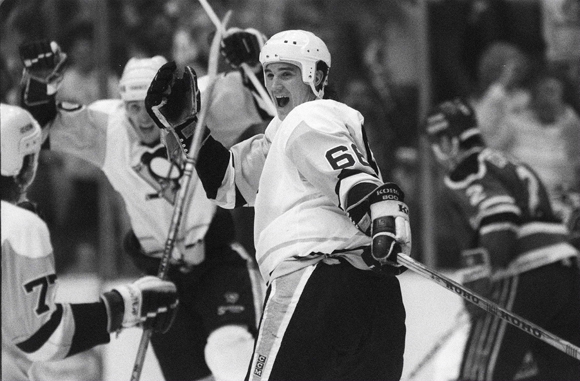 The saying is that records are made to be broken. Well, that may be the case with most records, but the NHL records profiled below are so outrageous that they just might stand forever.

The first one that comes to mind is Mario Lemieux scoring five goals in five unique ways. Scoring five goals in a game is quite a feat in and of itself, but to net five goals in five different ways is a once in a lifetime achievement. Lemieux set the record on December 31, 1988. On that night Lemieux rang in the New Year by scoring short-handed, even strength, on the power play, on a penalty shot, and into an empty net. There are two things that make this record nearly impossible to break. First, getting awarded a penalty shot is not commonplace. Second, for a player to score four goals and still have his team in a close enough game where the opponent pulls the goaltender for an extra attacker is very rare. Lemieux recorded a total of eight points that night and fell two points shy of another seemingly unattainable record, most points in a game. That record belongs to Darryl Sittler. Sittler, Toronto’s second all-time leading scorer, recorded six goals and four assists on February 7, 1976. The thought of an entire team posting ten goals in today’s NHL is farcical, but to have an individual player figure in on ten goals in a single NHL contest is nearly unfathomable.

Of course, when speaking of individual achievements, most of the NHL’s offensive records are held by Wayne Gretzky. He holds, by a wide margin, the records for career regular-season goals (894), assists (1,963), and points (2,857). Additionally, Gretzky’s 92 goals during the 1981-82 season is assuredly a milestone that will never be surpassed. He also holds the record for the second most goals ever in a season with 87 during the 1983-84 campaign. Consider that Jamie Benn won the scoring title with 87 total points, not goals, last season.

Speaking of a player having a great season, in 1992-93 Winnipeg Jets rookie Teemu Selanne notched 76 goals, shattering the old record of 53 by Mike Bossy. The 76 goals in one season is actually tied for fifth most goals in a season by any player, rookie or otherwise. Selanne, Phil Esposito and Alexander Mogilny all netted 76 in a season. Ironically, Mogilny also scored 76 in the 1992-93 season. In addition to the 76 goals, Selanne also set the bar for points in a season by a rookie with 132.

While individual records are nice, hockey is a team sport. With this in mind, some of the greatest (and worst) NHL teams of all-time have set some unattainable records. For example, the 1983-84 Edmonton Oilers hold the NHL record for most goals scored in a season, tallying an astonishing 446 goals. To illustrate how outrageous 446 goals is, consider that Tampa Bay lead the league in goals last season with 259. In fact, no team has even cracked 300 goals since the 2009-10 Washington Capitals scored 313.

Some team records from the Original Six era have to be taken with a grain of salt because, well, there were only six teams. However, there are some team records from that era that simply cannot be ignored. For instance, the Montreal Canadiens appeared in the Stanley Cup Final ten consecutive seasons from 1951 to 1960. That same Canadiens franchise also holds, and most likely always will, the record for most Stanley Cup Championships with 24; (well, technically 23 since they won their first Stanley Cup in 1916 when the NHL did not exist yet). The next closest franchise is the Toronto Maple Leafs with 13 Stanley Cup Championships. However, Toronto has not won the Cup since 1967 and doesn’t appear poised to capture the Cup this season; the Canadiens mark of 24 Stanley Cup Championships seems to be safe for eternity.

Two other team records that figure to stand the test of time both involve the number eight. The 1976-77 Montreal Canadiens lost just eight times the entire season en route to yet another Stanley Cup Championship. Conversely, the 1974-75 Washington Capitals won just eight games, posting the fewest points and worst overall record in NHL history. Just for good measure, the 1974-75 Capitals also allowed 446 goals, another NHL record. Again, for comparison sake, Edmonton gave up the most goals in the NHL last season by surrendering 276 lamp lighters, which is slightly more than half of the goals that the 1974-75 edition of the Capitals gave up. While we’re on the subject of futility, the 1980-81 Winnipeg Jets went on an unprecedented 30-game winless streak. With the advent of three-on-three overtime and the shootout, the argument could certainly be made that it would be virtually impossible to go more than 30 consecutive games without a victory.

The records referenced above vary from miraculously magnificent to sinfully sad, but the one thing they all have in common is that they are likely to stand forever, and forever is a long time.