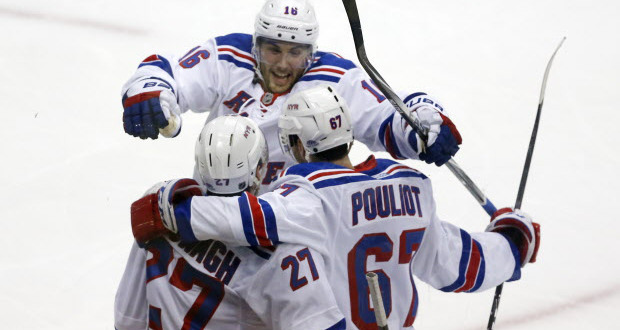 PITTSBURGH – The Pittsburgh Penguins didn’t get the start they wanted in Game 1 or their best-of-seven second-round series against the New York Rangers.

The Penguins rallied from an early two-goal hole to force overtime, but Derick Brassard scored at 3:06 of the extra session, giving the Rangers a 3-2 victory in Game 1 of the Eastern Conference second-round series at Consol Energy Center in Pittsburgh.

“I think for whatever reason we didn’t come out hard enough,” Penguins’ captain Sidney Crosby said. “You don’t want to fall in that position. It’s tough in the playoffs to come back like that.”

Brassard made sure the Penguins didn’t complete their comeback, netting his first of the playoffs for the Rangers, who took a 1-0 lead in the best-of-seven series. Game 2 is 7:30 p.m. Sunday in Pittsburgh.

“I’m just happy we won this game,” Brassard said. “It’s obviously huge when you win the first game. It puts a lot of pressure on the other team.”

Rangers’ forwards Brad Richards and Benoit Pouliot both scored their third of the playoffs in regulation. Star forward Rick Nash, who scored 26 goals for New York in the regular season, went scoreless and has just one goal in 20 playoff games in a Rangers’ uniform. Goaltender Henrik Lundqvist stopped 34 shots.

“We responded really well in the third period,” Lundqvist said. “That was the key.”

The Penguins, 0-3 in playoff overtime games this season, lost Game 1 for just the fourth time in their last 14 series that started at home.

Lee Stempniak and James Neal both scored their second of the playoffs for Pittsburgh. Crosby’s drought continued as the Penguins’ captain, and likely NHL MVP, still hasn’t scored in seven playoff games this season and the last 12 overall. Evgeni Malkin, who broke out with a hat trick in Game 6 against Columbus, was held without a goal on Friday.

The teams were tied 2-2 after two periods and couldn’t come away with a game-winner in the third.

Brassard did the job in overtime as his winning shot snuck over Marc-Andre Fleury’s shoulder and underneath the cross bar. Fleury made 24 saves.

Play initially continued after Brassard’s shot as the puck popped out of the net, back into play and a scramble ensued. Pouliot eventually got the puck across the line again, but it wasn’t needed with Brassard’s initial game-winner.

“I didn’t hear a whistle and heard the post,” Pouliot said. “The way the puck came out, I had no clue. There was a mad scramble again and it ended up going in again.”

The Rangers played their third game in four days after dispatching the Philadelphia Flyers during Wednesday’s Game 7 of their first-round series. It doesn’t get any easier for the Rangers, who will play five playoff games in seven days after Game 3 of the series, the first NHL team to do so since 1989. They don’t seem to mind, the way they’re playing now.

“We played seven games and the seventh one was grueling, but I think most of us have been through it,” Pouliot said. “We’ll be fine.”

The Penguins were expected to send inexperienced Columbus home without much effort during the opening round of the playoffs. But Pittsburgh was forced to respond several times to adversity and needed six games to advance.

They faced adversity again in the form of an early two-goal deficit on Friday.

“We found a way to battle back and give ourselves a chance to win,” Neal said. “It’s the playoffs and you have to be desperate for every win.”

The Penguins and Rangers split four regular-season meetings, all coming prior to the Olympic break. The teams met in the Stanley Cup playoffs for the first time since the 2008 Eastern Conference Semifinals, won by Pittsburgh en route to back-to-back appearances in the Stanley Cup Finals.

The Penguins are looking to advance to the Eastern Conference Finals for the second straight season, while New York hopes to reach the conference finals for the first time since 2012.

Pouliot put the Rangers ahead 5:04 into the game, his wrist shot from the slot on the rush beating Fleury over the shoulder.

Carl Hagelin did the dirty work on the Rangers’ second goal, scored late in the first period. Hagelin was the first to a puck in the corner and he centered to the slot where an uncovered Richards turned to the forehand and beat a downed Fleury.

Stempniak gave Pittsburgh life, scoring midway through the second period. Beau Bennett set up the goal, dishing a pass at the blueline and Stempniak took care of the rest, working his way into the slot and beating Lundqvist with a backhander.

Neal tied it with 6:32 left in the period, sending a rocket that ricocheted off Lundqvist’s shoulder, popped into the air and dropped into the net. Referees took a look at the goal, but it was determined

Malkin’s nearby high stick did not touch the puck prior to crossing the line.

It forced overtime, but that wasn’t enough to allow the Penguins to complete their comeback.

“In a series where four knocks you out, I think your desperation level naturally goes up more,” Penguins’ defenseman Rob Scuderi said. “We’re one loss closer to being out and I hope we bring that level in the next game.”

NOTES: Pittsburgh’s Brandon Sutter and Joe Vitale, who left early during Game 6 against Columbus because of injury, were back in the lineup… The Penguins are 4-0 all-time in playoff series against the Rangers, going 16-5 in 21 games…Pittsburgh advanced to the second round for the second straight year and fifth time in seven seasons.