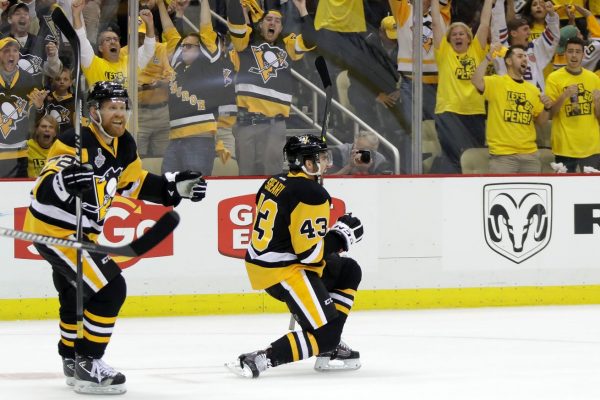 Penguins’ left wing Conor Sheary is currently a member of the team’s top line alongside Sidney Crosby. But will Sheary maintain his lofty standing?

His goals in blowout wins over the Rangers in Games 4 and 5 of the Penguins’ opening-round series may be a sign of offensive things to come. Goals in Games 1 and 2 of the Stanley Cup Final, the second of which was an overtime winner, could be proof that he can be a consistent source of offense.

Those examples also work the opposite way.

Those goals signify his entire output in 23 games on Crosby’s wing. Crosby, who is known as one of the best playmakers on the planet, has 600 career assists and likely would have had more than 13 helpers in the postseason if Sheary had finished a little more often.

That isn’t to say that the diminutive Sheary, who stands 5-foot-9 and weighs 175 pounds, didn’t have moments in which he looked comfortable playing in such a high-profile role. He seemed to mesh with the Penguins’ captain, but can it work over the course of an 82-game regular season without a significant uptick in production?

Sheary finished the postseason with 10 total points with six assists. Interestingly, none of them produced Crosby goals.

He set up three scored by Patric Hornqvist, two by Kris Letang — one of which was the Stanley Cup clincher — and one by Chris Kunitz. He certainly wasn’t overwhelmed in big moments, especially after being held out of Game 5 against the Lightning. He played some of his best hockey the rest of the way en route to finishing off the Lightning and Sharks.

His regular-season statistics do not provide much in terms of telling us what’s to come. He wasn’t used in the same kind of role that he slotted into during the playoffs and was limited to just 9:45 minutes of ice time per game. He produced a total of seven goals, 10 points and 51 shots on goal in 44 games.

Without being able to use those numbers as a guide, his playoff production is the only example of what he is capable of in the NHL. It is worth noting that playoff games are not as loose as those played in the regular season. Defenses can be a bit more lax and games a bit more high-scoring, which in itself might help Sheary produce a bit more, but that may add 10 or less points to his totals.

A look at his statistics in the American Hockey League show a player who is capable of chipping in significantly more offense.

He played 90 regular-season games for the Wilkes-Barre/Scranton Penguins over the past three seasons and rolled up 27 goals, 54 assists and 81 points. He posted 220 shots on goal and a plus-8 rating. He was better in the postseason, where he became a point-per-game player with 11 goals, 12 assists and 23 points in 23 playoff games. He produced 62 shots on goal, or 2.70 per game, which improved upon his 2.44 regular-season shots-per-game average.

Sheary seems to be matching the early seasons of a player he is often compared to: Marty St. Louis.

St. Louis, who started off with the Flames before putting together a likely Hall of Fame career with the Lightning and Rangers, is almost an exact match in terms of size (5-8, 176). He had 391 goals, 642 assists and 1,033 points over 1,134 NHL games but collected just four goals and 20 points in his first 63 games.

It would be folly to assume that Sheary will have the same kind of career as St. Louis, but the latter made big gains in all statistical categories during his third season in the league, his first full campaign.

Sheary will be in Pittsburgh from the start of the year and should have every opportunity to thrive in a high-profile role, just as St. Louis did during that first full season in Tampa Bay that saw him put up 18 goals, 22 assists and 40 points.

That kind of production would be just fine with the Penguins.