Dan Scifo provides his weekly look at the Penguins… this time discussing how good team defense and goaltending have contributed to the team’s recent surge. 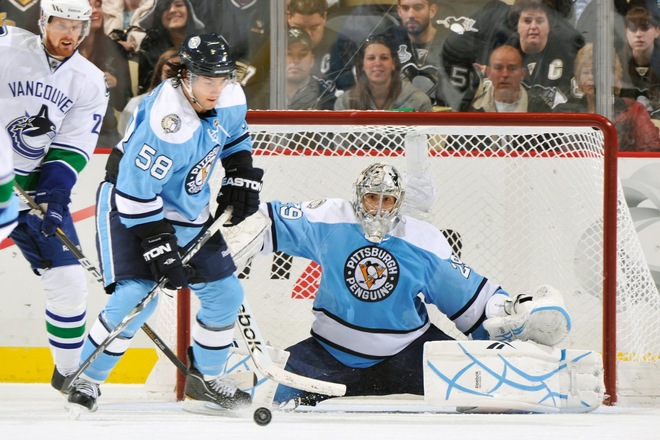 It looks like the Pittsburgh Penguins finally appear to be moving in the right direction. They are turning the puck over less, allowing fewer odd-man rushes, and beleaguered goaltender Marc-Andre Fleury has seemingly played his way out of an early-season slump.

“You’re seeing our team understand how we need to play offensively,” Penguins’ head coach Dan Bylsma said. “On the other side, puck management-wise, puck decision, battle level, and defensively you’re seeing more of that from our team at key moments in the game.”

It’s certainly a 180-degree reversal from last Wednesday when the then-undisciplined Penguins blew a two-goal, third-period lead and allowed Boston to score five goals in the final 20 minutes. Penguins’ defenseman Brooks Orpik said the team’s outlook in its own end has changed.

“The effort has been exactly the same,” Orpik said. “The approach and attitude we have toward the situation has been a lot better.

“We aren’t pinching in and making aggressive decisions and instead we’re taking what they give us.”

There also has been a commitment toward avoiding turnovers at their own blue line or in the neutral zone.

“We want to make them go 200 feet to get chances,” Orpik said. “We don’t want to give them chances by being too aggressive.

“We’re picking our spots and at the same time we’re not sitting back and protecting the lead, we’re just playing a little smarter.”

Fleury’s resurgence is also a huge reason why the Penguins notched their fourth win in six games Wednesday night against Vancouver. Fleury turned aside 29 shots against a potent Canucks’ offense and picked up his third win in four games. The defense has also played well in front of Fleury as the Penguins have surrendered seven goals in those four games.

“I feel good. I feel more comfortable and I feel better between the pipes,” Fleury said. “It feels like every night we have a chance to win. You just have to keep going and build off it.”

The Penguin fans, at least for the time being, also seem to have forgiven Fleury for his early-season struggles. After taking a slap shot to the mask during Wednesday’s win against Vancouver, the 18,252 in attendance broke into chants of “Fle-ury”, “Fle-ury.”

“So many people were talking about him to start the season,” Penguins’ forward Max Talbot said. “They can’t talk about him now so it’s definitely good for us to have (Fleury) playing at the top of his game.”

The Penguins’ penalty killing unit has contributed to the recent stretch, successfully killing 41 of 44 power plays during their last 10 games. This included a perfect 5-for-5 effort against Vancouver, the No. 2 power play in the league.

“We’ve been on the other side of that where it’s frustrating as a power play and that’s what we’re doing to other teams,” Penguins’ captain Sidney Crosby said. “We’re frustrating them, we’re blocking shots, and making it tough and to top it all off, we’re getting a couple goals on the penalty kill, so that’s huge and can change a game.”

Crosby has also done his part as the Penguins’ captain is currently riding a seven-game point streak. Crosby, who scored eight points in three games last week, has 14 points in seven games and is in second place behind Tampa Bay’s Steven Stamkos for the NHL scoring lead.

The Penguins’ recent resurgence hasn’t happened overnight, and according to players, it didn’t start after the demoralizing loss to Boston either.

“I think we’ve slowly been building,” forward Craig Adams said. “I think we played a descent game in Anaheim and a good game in Phoenix. We’d like to forget about the third period against Boston, but we played those guys pretty well through 40 minutes. The other night (against New York) was a crazy ending, but I thought we carried the play in that game too, so we’ve probably been building the last five or six games.”

The Penguins will look to sustain their momentum with a home game tonight against Carolina before a pair of road games next week at Florida and Buffalo.

“We’ve been playing pretty solid hockey for the last six games,” Talbot said. “We’ve been progressing and building on that and it’s showing game after game.”