Alyssa Milano brings her Touch by Alyssa Milano line to the CONSOL Energy Center. The line will be available in a new PensGear shop powered by G-III Apparel. 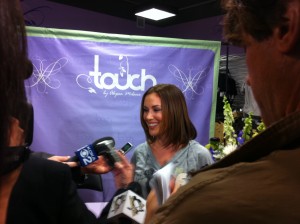 Though the big story at the CONSOL Energy Center tonight was the fact that the Penguins and Hurricanes were meeting in an Eastern Conference showdown, there was another story line that many were very curious about. Alyssa Milano, who for years has starred in hit television programs such as “Who’s the Boss,” “Charmed” and “Melrose Place,” was in town for the grand opening of a new PensGear store powered by G-III Sports that will feature both Men’s and Women’s licensed fashion products as well as Touch by Alyssa Milano product for the women’s sports fan.

Though Touch by Alyssa Milano products have been available on via NHL.com for three years, this retail outlet is only the second of its kind in a professional sports venue. The other resides in the new Citi Field where the New York Mets play.

Milano joined Penguins CEO David Morehouse for a ribbon cutting, before taking the time to meet with a number of gathered media members (including yours truly) to talk about her line of clothing. It is fair to say that she is excited about her line, but was quick to point out that she wants it to be an alternative for female hockey fans more than a replacement for what might be out there currently.

“I am not trying to by any means take over for the jersey,” Milano said. “This comes from being a huge sports fan and going into stadium shops and arena shops and looking for something to fly the team’s colors — to be supportive and not finding anything that’s not pink.

“This would really be the alternative to the jersey. I would treat it as clothes to change into if they were ever going out after a game to eat dinner.” 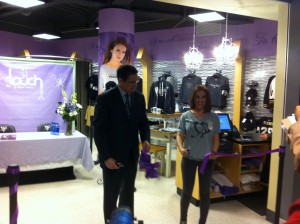 Milano went on to explain that the entire line was something that could essentially be worn anywhere to show support for a particular team, while at the same time being very fashionable. She is passionate about keeping the line on the edge of what is currently trending in the fashion world and ensures that the design team stays ahead of that curve.

“I’m really fanatical about A: that the clothes not only be fashionable — and the way we do that is to really try to stay on track. Meaning whatever is going to be big in the fashion world we try to design accordingly,” said Milano. “It is so important to me that the clothes are wearable to games… I want things to be wearable in the stands. So just keep on growing in that respect, but I think as fashion evolves we are going to try to stay on trend with our styles.”

Though she was excited about being here to launch the retail shop, she was also pretty fired up to get a look at the bowl and the interior of the arena. However the long time Kings season ticket holder said that she had pretty high standards based the fact that the “Staple Center is gorgeous.”

Overall, I would say that the line will be a home run for Milano and all involved as you can definitely see the difference from the “pink” apparel that she mentioned above. It all features team colors and is indeed very fashionable.

You can catch Alyssa Milano in several projects that will be airing and or available in the very near future.

“I have a lifetime movie that is airing December 6th that’s called Sundays at Tiffany’s — it is a lovely love story, not sure that it’s really the guys sports demo,” she said laughing. “I also have a romantic comedy that’s being released on Warner Bros. Digital called my Girlfriend’s Boyfriend and that comes out on December 1st.”

Milano first purchased her Kings season tickets “before Gretzky got there” and has spent many a fall and winter night watching the team play.

She was excited in mentioning the growth of hockey in LA, especially after having been a firsthand witness to the empty seats that were so prevalent there in the late 80’s and early 90’s.

A member of the media scrum asked her about dating Rob Brown and if she has talked to him – “I haven’t talked to him in years.” I believe that she said 30 years, but that isn’t possible.

She also said that this was her first time seeing the Penguins play in Pittsburgh and was excited about that.

On a side note… it was a thrill to be in such close proximity to an icon from my youth. I have long been a fan of Ms. Milano and was excited for the opportunity to ask her a question… albeit a lame one; though she did get to plug some upcoming projects…