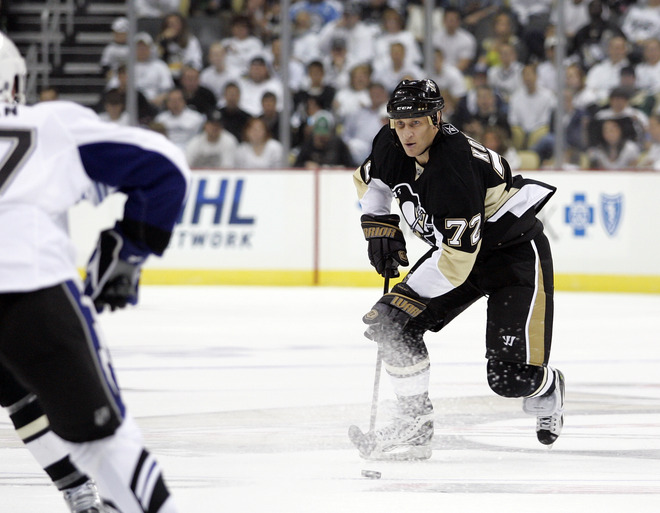 Sure, the rest of it was pretty damn cool as well, but I would have liked to have savored it all a bit more. I feeling like I just finished my shopping and I am already heading back out to the mall to wait in the long holiday lines. However, these lines surround a holiday unlike any other… the National Hockey League playoffs – and they are lot more fun to stand in!

I am having a bit of trouble putting together my “Five Things” for this evening based on the fact that my mind feels a bit scattered, but I am going to give it a go! So… enough yammering Metzer, make with the blog…

1 – The Open and Anthem – I used to get chills all the time at the arena and sadly it just doesn’t happen that often anymore. However, that certainly wasn’t the case tonight. The opening montage of the playoffs is always something to look forward to and the team did a wonderful job with this year’s. The highlights were perfect, they inter-mixed some Mike Lange goal calls, though they added a couple of cool effects to them and it all happened to a very cool soundtrack. It was a “Boy that was pretty (expletive deleted) cool” moment. Then they brought out Sgt Jim Timney of the United States Army to sing the National Anthem… he did something that I have never experienced at a Penguins’ game… he got the entire crowd to sing along with the Anthem. It was definitely an amazing moment and one that I won’t soon forget. We can only hope that Penguins’ TV will get that up for you all to enjoy…

2 – The 7th Man – throughout the season I have heard a number of folks bash the crowds at the Consol Energy Center for not being loud enough. They have pointed out that there have been a number of fans more interested in conversation and doing business than in the product on the ice. Well let me tell you that I truly felt the decibels of this crowd tonight. I can only compare it to the roar that Mario Lemieux received when he poured the “Igloo Water” out at center ice during the home opener. This crowd was immediately into the game, paying attention and providing their share of the momentum. I hope that they can keep it going, as they are really showing why it pays to have home ice advantage in the playoffs… and it all started with Sgt Timney getting them going with the Anthem.

3 – Penalties – Though the Penguins power play wasn’t able to get on the board, they did provide a bit of a spark. From the second period on the Penguins were controlling play during their man advantages and producing scoring opportunities. The interesting thing about that is that the Lightning continued to take penalties – seven in all. They allowed the Birds to get those chances with the extra man and then allowed them to gain some confidence by controlling the puck in the zone. It is worth noting that the Lightning were seemingly unafraid of the Penguins PP and felt that they could play recklessly. That isn’t to say that they were flagrant or anything, though they were a bit careless with sticks etc. It was one of the few times I have seen a power not score and come across as a difference maker in the game.

4 – Marc Andre Fleury – The Flower certainly bloomed this evening and it was great to see it happen against the team that essentially jump started his season. Back in November, Fleury had just finished the worst October of his career and the fans at the Consol Energy Center greeted him with a pre-game Flower chant. It is largely credited with turning things around for him and building his confidence. He went on to have one of the best statistical seasons of his career and was ready tonight. The Flower made huge stops on Ryan Malone and Vinny Lecavalier early in the game… and they were the kinds of saves that one only makes when he is in the zone. Rather than kick this game off with chants of “Fleury, Fleury, Fleury,” he ended it that way, along with an “MVP, MVP, MVP” echo and a shutout. 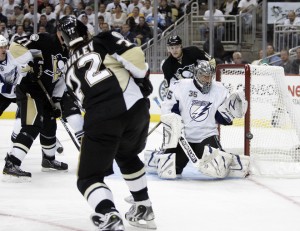 5 – Kovy Rides Again – Alex Kovalev was brought in to help bolster the top six in the absence of Crosby and Malkin, help the power play, and score some goals. He hasn’t exactly done that to this point, though he still flashed glimmers of what he could be when he wants to. Well, he clearly wanted to this evening and did his best to look like the old him. He notched 5 shots on goal, second only to Jordan Staal who finished with 6. (He actually attempted 10 shots in the game) He also managed to score he Penguins first goal on a nifty little play that started with him getting dumped down on the goal line to the right of Dwayne Roloson by Pavel Kubina. Kovy looked for a call that didn’t come, but then sort of went into panther mode – lying in wait beside Roloson. The puck was worked around the boards and eventually Paul Martin got it to James Neal at the left point. Neal immediately sent it to a wide open Panth… I mean Kovalev, who buried it into a yawning cage for the first goal of the game. The tally made this place erupt, got the momentum back and 18 seconds later the team was leading 2-0 after Arron Asham caught the Bolts on their heels following the face-off. Funny how a guy can just turn it on when it counts… Bylsma said it best:

“I think at different times in the past 20 games or so we’ve needed a goal or the power play maybe needed a goal and Kovy has that calm demeanor about him. He says we didn’t need it — after the game he’d say we didn’t need it. [He has that] Kind of that mentality… he has always had that ability to be a factor in playoffs and he has been a playoff performer. It wasn’t too big a surprise to see him get that one opportunity on a very difficult situation, a great play by Paul Martin, it’s a tough goal to put on net, he had very little room… he gets that first goal for us, that first goal of the game. There might have been a little smile on my face after seeing 72 get that goal.”

More later… will hit you with some additional quotes in the morning… much transcribing to do!