The rosters for the Alumni game are upon us! 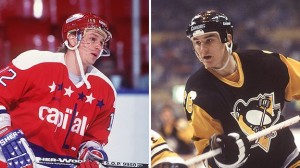 The Winter Classic events will kick off in grand fashion with the much hyped Alumni game that was announced on 12/10/10. As we were already told, the rosters would be headlined by Mario Lemieux on the Penguins’ side and Peter Bondra on the Capitals side.

I am not sure about you, but the suspense was killing me as I waited for the official announcement of the remaining players on both sides. Sure there was a ton of speculation, but nothing was official — until today! The roster announcements just arrived in my inbox and here they are for you…

Infusing some youth into that grizzled group of veterans are Bill Guerin and Gary Roberts, two of the biggest folk heroes in Penguins history.

I for one am pretty jazzed about the thought of seeing Lemieux flanked again by the liked of Stevens, Tocchet and playing the power play with Robbie Brown. Could a windmill be in our future? I certainly hope so!

Eddie Johnston, Pierre Larouche and Randy Hillier will coach the Penguins, and Jack Riley – the team’s original general manager in 1967 – will serve as GM.

On this side I am very anxious to see several players who I used to love to hate. Bondra and Pivonka lead the pack, as I used to love their talent, but hate their thorn in the side of the Penguins’ ability.

The Caps could also be adding a couple of names in the coming days… it is also worth noting that a couple of respected media types have speculated that Larry Murphy may consider dressing for each team at different times during the game.

Others may be added to the Caps roster in the coming days.

Once again, in case you missed the logistics last week, the game will be played on Friday December 31 at 9:30am.

The Pittsburgh Penguins also will hold an open practice session at the Heinz Field rink following the game at 11:30 a.m. One ticket, for $25, will enable fans to attend both the alumni game and the Penguins’ practice. (The Washington Capitals 2 p.m. practice will be closed to the public).