Over the next few weeks we will be rolling out a handful of new site contributors and I am pleased to welcome Dan Scifo to the FTP team. Dan is the assistant sports editor and a staff writer for the Latrobe Bulletin. He regularly covers the Penguins, Steelers, and a variety of high school sports.

The Indiana University of Pennsylvania graduate lists covering the Penguins run to the Stanley Cup Championship in 2009 and the Steelers victory in Super Bowl XLIII as the highlights of his career to this point. His contributions can be read on Fridays moving forward.   – Metz 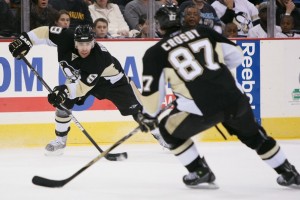 The Pittsburgh Penguins are not only looking for their first win at the new Consol Energy Center – they’re also searching for their identity.

This was especially evident after Wednesday night’s less-than stellar effort during a 4-3 loss against Toronto.

“The first period, and parts of the second, we were pretty sloppy,” said defenseman Paul Martin. “We put ourselves in a hole early and we didn’t start putting some pressure on them until the third, but it was too late.”

Now, the pressure is on the Penguins Friday night to notch their first victory at the Consol Energy Center, but even if they defeat the New York Islanders, their problems might not be completely solved.

Superstars Sidney Crosby and Evgeni Malkin have a combined four points – one goal each – through four games and goaltender Marc-Andre Fleury’s inconsistent, spotty play has directly played a part in losses to Toronto and Montreal.

“There’s a couple that are goals he has to come up with a save for us,” Penguins’ coach Dan Bylsma said after Wednesday night’s loss against Toronto.

But it hasn’t all been Fleury’s fault. Frequent turnovers and sporadic, sloppy play on the defensive end has also contributed to the Penguins 1-3 start.

“We’re turning a lot of pucks over and we’re not supporting the puck like we should,” defenseman Alex Goligoski said. “Instead of playing up and down the rink, we’re playing side-to-side.

Bylsma attributed the Penguins’ problems to a lack of execution.

Several players said the team sometimes is too fancy with its passes, which can lead to careless mistakes. Bylsma said a common misconception about the identity of his team is that it is a highly-skilled, dangerous club whose offense revolves around pretty plays and tic-tac-toe passes.

“When we play that game and fall under that identity, we run into problems,” Bylsma said. “We’re a team that wants to play in the offensive zone and wear teams down with our speed.

“That’s our mentality and that’s the best way for us to play defense and get to our game.”

Fancy passes and a lack of execution, Bylsma said, is a great way for the opposition to take control.

“We have done that through four games, it’s away from where our focus needs to be, and we’re well-aware of it,” Bylsma said.

The good news is that the Penguins have plenty of time to find their identity. It’s not time to hit the panic button just yet.

“You expect to win each game and the guys are working so hard and it starts to get discouraging,” Martin said. “But that’s something we can’t concentrate on.

“We have to be ready and play the next one better.”

It is certainly a concern that Crosby, Malkin and the rest of the offense hasn’t found the back of the net with regularity. Turnovers, lapses in the defensive zone and inconsistent play from Fleury are also an issue at the moment.

But the Penguins have 78 games to sort it all out. Most of the players in this group were on the team when the Penguins won the Stanley Cup two short seasons ago. They know what it takes to reach the top of the mountain.

In due time, they will return to the upper-echelon of the Eastern Conference.

For now, the Penguins are just searching for their identity.

“We just want to win,” Goligoski said. “I think everybody knows what we have to do.”

“Something is missing right now.”