“So all due respect to them, a team that’s as experienced and as good as we are, we shouldn’t be losing games that way.” – Brooks Orpik 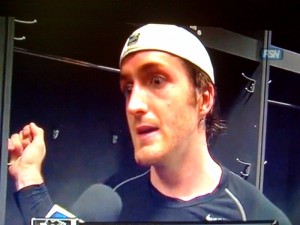 They were down 1-0, clawed back to take a 2-1 lead and watched it fizzle away when the Capitals made them pay for a couple of mistakes that they made in the game.

The tying goal came off of the blade of Sidney Crosby, when he went to the “cross ice pass” well one to many times. Alex Semin was lying in wait, picked off the pass and was off to the races. He made a great individual play before lashing a wicked wrist shot past Marc Andre Fleury. Sure, there were other problems with that play, but Sid has got to stop forcing that pass.

The second goal came on a situation where the Penguins just couldn’t get the puck out of their own zone. It was eventually worked out to Mike Green, who got the puck into an area where Eric Fehr could tip it in behind Fleury.

Again the Penguins wouldn’t be denied and Jordan Staal found a way to get a shot past Jose Theodore. Staal picked the far top corner, with a great wrist shot moments after Theodore robbed him on a rebound opportunity in front of the net.

At that point the Penguins had MO on their side and it seemed as if they were finally going to get the defining victory that they had been looking for heading down the stretch. That wasn’t to be…an overtime and four shoot out rounds later they were leaving with another OT loss at the hands of the Capitals.

There were definitely some good things to hand our hats on in the game. They outplayed the Capitals for large stretches during the game. Shot the puck from everyone on the ice and played a pretty decent defensive game. The thing that most impressed me was the fact that they did it all without Sergei Gonchar and Evgeni Malkin. You would like to think that having those two players in the line-up would have been enough to secure the victory last night.

Missing stars aside, at least one Penguin was disappointed with the loss and I am sort of glad to hear it. Brooks Orpik made some very harsh statements post game and though they were doom and gloom, they were the type of thing that we have come to expect from Brooks. He is a “tell it like it is” kind of guy and is always a great quote. He doesn’t have much of a self censor and he isn’t satisfied with where his team is.

Orpik’s comments were on display for all who tuned in for the Penguins post game show.

“Do I think so? Yeah,” Orpik said when asked if his team should have come away with a victory. “We’re up by a goal in the third period. We get a power play and have a chance to make it 3-1, and instead we give them a short-handed goal. So all due respect to them, a team that’s as experienced and as good as we are, we shouldn’t be losing games that way.”

He wasn’t done there as he went on to explain his feelings on saying they the team deserved better and the whole “They’ll turn it on in the playoffs” philosophy.

“Maybe I’m in the minority here, I’m getting tired of hearing that we played hard and we should have deserved better,” Orpik said. “We’re not winning hockey games, and that’s what it comes down to. I don’t know. I don’t feel very good leaving the rink when you lose, no matter how you played.”

The scrum went on to ask Orpik is he is concerned about what has been happening as of late to his team…blowing leads and losing games late etc.

“I’m getting very concerned. Everyone wants to talk about the playoffs,” Orpik said in a disappointed tone. “We’ve still got eight games to go here, and we’re not exactly playing too well. The way we’re playing now, we’ll be out in the first round. It’s getting pretty frustrating, yeah.”

The interviewer then asked him if there was any concern about not beating the Capitals to this point on the season. (Thanks to the boys at the Pensblog for this quote…I somehow missed it!)

“Look at last year; I think they beat us 3-1 last year, too,” Orpik said. “That didn’t add up [in the postseason]. So I don’t think it matters, but I think obviously, no matter who you’re playing, you’ve got to take care of what you’re doing a little better right now. We’re not. We’re finding ways to lose.”

Obviously some harsh words from Orpik, but some very true ones… they might have been a bit more appropriate after Monday evening’s game, but it was clear that the Orpik’s visible frustration had been building for a few games.

If there was one area that struggled more than any other last night, it was a fairly listless power play. The Penguins had multiple opportunities with the extra man and did nothing with them. I realize that can be traced back to the absence of Malkin and Gonchar, but it isn’t as if the PP was devoid of talent.

The Penguins paraded out a top unit featuring Letang, Goligoski, Crosby, Guerin and Ponikarovsky multiple times. On paper that looks like a unit that can wreak some havoc…well, it wasn’t able too.

Unproductive nights with the extra man like last night are why I am blown away by all of the folks that would be content to see Sarge walk after this season. Neither Goligoski nor Letang seem ready to become a power play quarterback.

Overall, the Penguins did show me that they cared last night, which is more than we can say for the past few games. If they can maintain their level of play once they get their full compliment of players back in the fold, then they just might be fine after all.

However, dropping back into the situation we had been seeing; where 4 or 5 players on the ice seem to be shouldering the load, will certainly prove Brooks Orpik right.