A collection of the latest news and notes, as well as some upcoming blog nuggets! 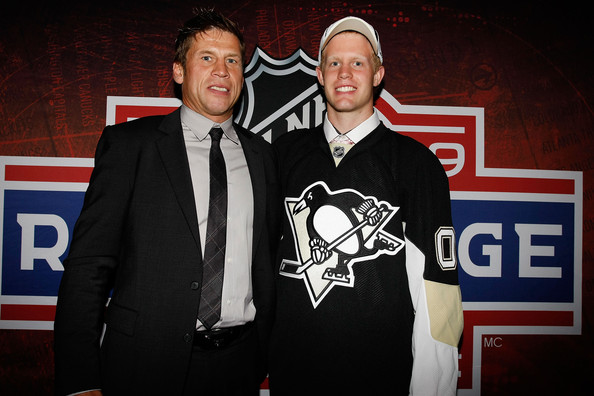 Well, I spent the day tying off some loose ends at the day job and doing an awful lot of writing for blogs other than this one! We here in the blog-o-sphere are a fairly friendly lot and we tend to help each other out and participate in different projects as they pop up. That was the case today, as I sent some opinions off to Jesse Marshall at Faceoff Factor, Nick Case at Case & Point and started work on a project that the great Jon Jordan and I will be doing throughout the Penguins/Lightning series.

If you aren’t familiar with JJ, he is one of the best Tampa Lightning bloggers out there and long time palio of yours truly. Jon and I used to work together at Hockey Buzz and have since moved on to do a ton of different things.

Of those different things, one that we always wanted to do but weren’t able to until now was collaborate on a project. This first round series between our teams provided the perfect opportunity for us to hook it up!

We will be linking to each others work throughout the series so that you can get a taste of what is going on behind the lines. However, we will also be contributing a good bit of commentary to the others site… JJ here and me at his Beasts of the SouthEast blog over at Kuklaskorner.com. The first piece for each of us has us answering five questions that were posed by the other. That will be up for your review tomorrow late morning. I will have a “Ten Things To Look For” preview up in the AM as well.

Until then, I wanted to hit you with all of the press releases that have built up in my box over the last two days… there have been a few of them.

Samuelsson has played the past two years with Boston College of Hockey East, winning the NCAA National title with the Eagles in 2009-10 as a freshman. That season, Samuelsson notched 14 points (1G-13A) and a plus-15 in 42 contests. The 6-foot-3, 198-pound blueliner completed his sophomore campaign this year with four goals, 16 points and a plus-17 rating in 39 games.

Samuelsson was invited to the USA Hockey National Junior Evaluation Camp for the 2011 competition in Buffalo, N.Y.

Samuelsson played one season with Chicago of the United States Hockey League in 2008-09, racking up 22 assists in 54 games.

Next up… local police officers will be accepting donations for one of their own who was critically wounded in the line of duty.

Officer James Kuzak was wounded on April 4th while responding to an emergency call for a home invasion. Here are the other details from the Penguins release…

“Officer Kuzak put himself in harm’s way to protect a family and their two small children,” said Dave Soltesz, president of the Pittsburgh Penguins Foundation. “His fellow officers and friends are trying to do what they can to help Jim and his family during this difficult time, and the Penguins are proud to cooperate with this collection.”

Officers will be located inside CONSOL Energy Center gates before the Penguins’ 7 p.m. game with the Tampa Bay Lightning Wednesday.

Next up… the Penguins are calling for a “White Out” during the first two games of the Penguins/Lightning series. They are asking you to wear white jerseys, sweatshirts, t-shirts etc. You also have the option of buying an “Official White Out” t-shirt from PensGear at the Consol Energy Center. The info is as follows…

The Pittsburgh Penguins are calling for White Out conditions at home playoff games this season.

The Penguins are encouraging fans to “Wear the White” — white jerseys, sweatshirts, sweaters, shirts or t-shirts — for all playoff games at CONSOL Energy Center.

Fans also have the option to purchase the Official Penguins White Out t-shirt, on sale now at the PensGear store at CONSOL Energy Center and local Dick’s Sporting Goods locations. There are special designs for males and females – each on sale for $14.99. A portion of the proceeds will go to The Pittsburgh Penguins Foundation to support youth activities, including youth hockey.

In addition, the team will distribute white rally towels to all 18,000-plus fans at every home playoff game.

The Penguins’ 2011 Playoffs are presented by Trib Total Media. 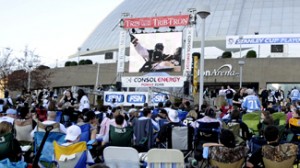 Last but not least… the Big Screen rides again. There has long been speculation about where the team would set the screen up and we have finally found out. They have utilized one of the old Civic Arena parking lots…

The 16’ x 9’ high definition screen will be located in the Civic Arena south parking lot along Centre Avenue, just across the street from CONSOL Energy Center.

Here are the rest of the details…

The board is presented by Trib Total Media.

Pre-game activities will be hosted by Mikey and Big Bob of 96.1 KISS FM. There also will be a dunk tank for Games 1 and 2, courtesy of First Niagara.

For safety reasons, grills and alcoholic beverages are not permitted.

As I said, I will be back with a ton more in the morning. Look for previews… predictions and the first Rebel v Rebel questions answered by my pal Jon Jordan.