The Penguins will report for training camp on Friday September 17th and hit the ice for the first time on Saturday September 18th at the CONSOL Energy Center. 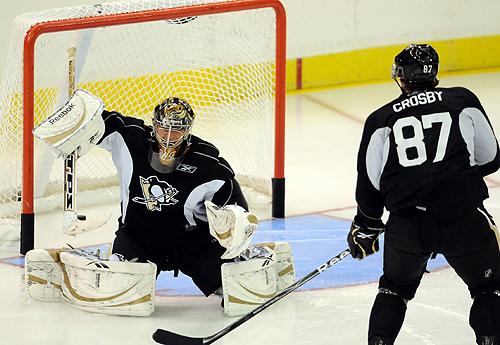 The Penguins will report for training camp on Friday September 17th and hit the ice for the first time on Saturday September 18th at the CONSOL Energy Center.

The first two practice sessions on Saturday September 18th and Sunday September 19th will be open to the public. The event is open seating and will run from 9:00am through 1:30pm. The gates will open at 8:45am. The Penguins will practice at 9:00am each day and take part in an intra-squad scrimmage at 10:00am. All concessions will be open on both days, along with all of the interactive areas and team store.

The Penguins will play six preseason games, beginning with the first-ever hockey game to be played at CONSOL Energy Center against Detroit Sept. 22. The Penguins will also host Columbus Sept. 25 and Chicago Sept. 28. All home games will start at 7 p.m.

59 players have been invited to camp — 35 forwards, 17 defensemen and 7 goalies.