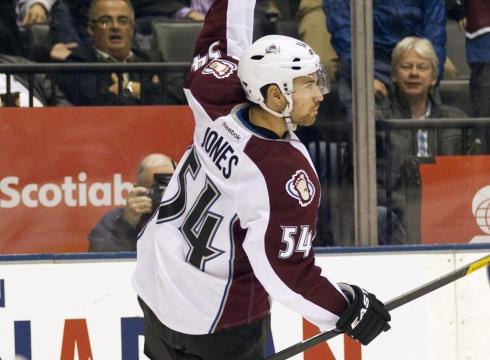 The NHL trade deadline is just 13 days away and we will be looking at some of the rumors and speculation that are swirling around the Pittsburgh Penguins. Also adding in a couple logical looks at what is out there, such as this piece about David Jones.

The National Hockey League’s trade deadline is right around the corner; in fact it is now just 13 lucky days away. Which means that trade chatter and speculation is picking up. Of course there has been little activity to this point, which essentially speaks to the fact that there are a number of teams sitting on the fence trying to determine which direction they are going to go – buy or sell?

The Penguins are definitely in the “buy” category at this point and they are joined by a number of teams in their own division. The Rangers, Flyers, and Devils could potentially be looking at the same exact pieces that are on the Penguins’ radar and that could drive prices up.

The popular opinion around the Penguins right now is that they could use a little help with secondary scoring and a stout defenseman to bolster a blue line that hasn’t lived up to expectations on a game-to-game basis. The Birds have been linked to everyone from Hal Gill and Mark Eaton to Rich Nash and Teemu Selanne by the rumor mongers and dung stirrers of the world, but not all of those make sense.

Sure there is always a chance that Ray Shero will find a way to catch lightning in a bottle and pull off another “Marian Hossa” type of deal, but I have been spending my time looking for the under the radar moves that might actually make sense in terms of the salary cap and I think I found an intriguing option to help address the team’s need for secondary scoring and I talked openly about it during my appearance with Steve Mears and Rob Rossi on Penguins Live last Friday– David Jones of the Colorado Avalanche.

Jones started to make some sense to me while reading Adrian Dater’s blog in the Denver Post last Monday. My old Versus.com crony and Avalanche beat reporter started his piece off by licking some stinging wounds that were left by the New England Patriot’s loss to the New York Giants in the Super Bowl the evening before, but he quickly transitioned into talk about the versatile Jones’s availability.

“If I had to bet? Yeah, I’d say David Jones will be traded by Feb. 27. He’s UFA this summer. The Avs can’t let a guy like him go for nothing. But they also can’t be blamed for not signing him to a richer contract extension right now. He’s making $2.5 million. Regardless of how his season finishes – it’s been mediocre at best so far – he’d get a good offer this summer from someone. He’s only 27 and scored 27 goals last year. Some team would take a good bet on his potential.”

That scoring potential, his size (6-foot-2 and 210 pounds), and his favorable cap number – a prorated $2.5 million, which works out to about $609,756 for the twenty games the Penguins will play following the Feb. 27 trade deadline, is what made him an intriguing option in my thinking. Adding the former 27-goal scorer would help take some pressure off of the top line of Evgeni Malkin, Chris Kunitz and James Neal.

Dater goes on to compare Jones to Tomas Fleischmann, who the Avs lost a year ago for nothing after he accepted a free agent offer from the Florida Panthers, and states that doing the same here would be “bad management” on the Avs part.

“Jones is in that Tomas Fleischmann category right now, and we saw how that went for the Avs. They lost him for nothing and he’s having a solid season for the Panthers, after getting a four-year, $18 million offer. Jones might not get that big an offer, especially with the year he’s had, but you never know.” 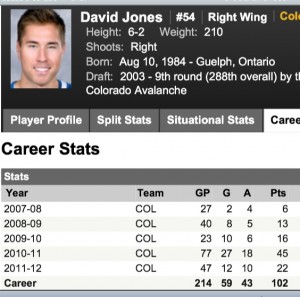 Adding Jones would give Dan Bylsma another forward who is capable of scoring 20-plus goals and it also gives him a winger that he could potentially slot in with Sidney Crosby when and if the Penguins’ captain makes his long awaited return to the line-up.

Jones hasn’t had a very good season to this point, but he is heating up as of late and has notched 6-points in his last four games. That success has come on a line with other skilled players in Milan Hejduk and Paul Stastney and one would have to assume that he would mesh with the likes of Sidney Crosby just fine.

According to Dater’s blog, the Avs are not in extension talks with Jones’s representatives and alludes to the fact that he might just be had on the cheap.

“But the fact remains: the Avs have to get something for him if they don’t want to re-sign him. I don’t care if it’s just a fourth-round draft pick or something, they have to do it.”

At the end of the day, Jones could make a lot of sense for both sides. The Avs could get a draft pick or player such as Eric Tangradi, while the Penguins get themselves a big forward with touch, who provides depth for the playoffs. They could also sign Jones to a cap friendly contract if they so choose to after his stretch run/playoffs audition.

If not, Jones can walk and no one is really losing anything in the deal. It is a vintage low risk, high reward trade that could pay off in spades if it were to come to pass.

The final piece of evidence that has my eyes trained on this situation is the fact that the Avalanche were scouting the Penguins games over the weekend. Does it mean anything? Maybe, maybe not… but it is certainly something to think about as we barrel towards the deadline.

What do you guys think? Is David Jones a fit on this team?