The Penguins will be looking for some payback today, as they played well enough against the Canes to win last week, but could not find a way to beat youngster Justin Peters. Peters made spectacular save after spectacular save and earned a couple of huge points for his team. 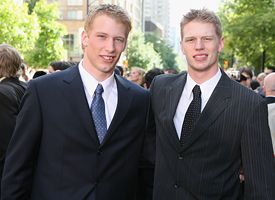 The Penguins meet the Carolina Hurricanes in a matinee at Mellon Arena. As I mentioned in the “Morning Pens Links,” I am no fan of these early games. First of all, they break up the day in a way that just doesn’t work for me, second the Penguins tend to play their worst hockey in games played before 6:00pm. I am not sure why that is, but they just seem to lose more often during games that are played while it is still light outside.

The Penguins will be looking for some payback today, as they played well enough against the Canes to win last week, but could not find a way to beat youngster Justin Peters. Peters made spectacular save after spectacular save and earned a couple of huge points for his team.

The Penguins may get a slight boost this afternoon in the form of Evgeni Malkin. Malkin is very close to rejoining the line-up, after missing the past week with a bruised foot. He was set to test it before today’s game before making the final decision.

The Penguins have posting an impressive 6-2-2 record over their last ten games, while the Canes have gone 6-3-1. The Penguins trail the all-time series against Carolina 51-48-14, but have bested the Canes on home ice going 27-22-6.

Sergei Gonchar is the Penguins leading scorer against Carolina, posting 32 points (7G-25A) in 51 career games against them.   He is joined by Bill Guerin and Ruslan Fedotenko who have posted 21 (13G-8A)and 20 (14G-6A) points respectively.

The goaltending match-up will be Marc Andre Fleury for the Penguins and Manny Legace for the Canes.

Tyler Kennedy scored his 10th goal of the season Thursday night at Boston to give the Penguins 12 players with double digits in goals –the most in the NHL.

The Penguins special teams have been strong of late. The Penguins penalty killing units have killed off 24 of their last 26 times shorthanded (92.3 percent), including their last 15 straight. Pittsburgh is also in a stretch of snuffing out 79 of the last 91 (86.8 percent) chances. Meanwhile, the power play has scored a goal in seven of the last 11 games, going 8 for 36 (22.2 percent)

Carolina has points each of the last five regular-season games against Pittsburgh.

The Hurricanes are 12-5-2 against Pittsburgh in the regular season since the start of 2005-06.