As many of you might have realized as you have read this blog over the years…generally speaking, I am a pretty big music fan. It is a rare moment that I am not listening to my iPod, Pandora, Sirius/XM or even (GASP!) terrestrial radio! It all just depends on where and what I am doing at the time. 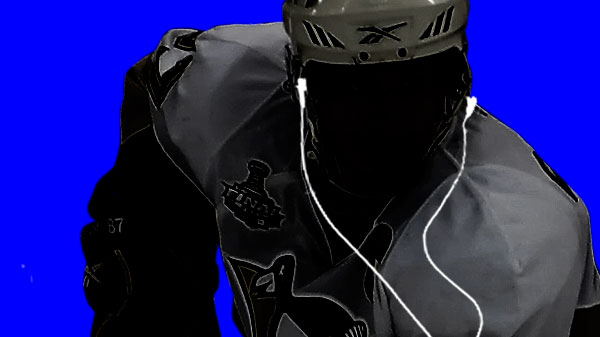 As many of you might have realized as you have read this blog over the years…generally speaking, I am a pretty big music fan. It is a rare moment that I am not listening to my iPod, Pandora, Sirius/XM or even (GASP!) terrestrial radio! It all just depends on where and what I am doing at the time.

Coincidentally, being that I cover the Penguins for this blog and several other outlets, I tend to spend a fair amount of time down at Mellon Arena, where they are nice enough to give me a pretty healthy dose of music during games. Having music blare from the house system is one of the cool things about watching hockey in person. At times, that music is just as discussed as are the games… Everyone wants to know which songs are being played so that they can spend their hard earned casheesh on iTunes or hit the ole Pirates Bay and relive those moments in song at any time!

I decided to devote this off day in the schedule to the songs of 2009… The songs that you hear during the warm up, stoppages in play etc are here on this list. Of course this list will evolve as the season rolls on, as the in game entertainment staff of the Penguins is always adding and subtracting tunes. I will put updates out as needed… in the meantime, here are the songs that are currently playing at Mellon Arena.

This song came out in 2008, but it sounds like it fell out of 1988! It can be heard playing before and or after warm-ups. It features a sort of psychadelic beat that offers nice ambiance to the darkend Arena.

It is no surprise hearing these boys being played as the first song of the warm up. Many of the Penguins players are fans of the band and the band seems to appreciate the Penguins. They went out of their way to swing through Mellon Arena after playing an opening slot for someone a couple of years back, saying that they couldn’t miss a chance to watch one of their favorite teams. Their music has long been featured in warm ups and in different montages over the years…the most popular selections being “Animal I Have Become” and “Riot.”

This is usually the second song played during the warm up. It’s first line calls out: “5-4-3-2-1 Lets start a fire” which is sort of a call to arms to the fans who arrived early enough to see the warm up, as well as the players on the ice…stirring it up and getting everyone fired up for that night’s game.

Yet another band that shouldn’t surprise anyone…they, like Three Days Grace, have long been featured at the arena and many members of the team are fans of the band. Truthfully, it is tough to find a Rise Against tune that doesn’t get you fired up and they are a very appropriate selection for the pre-game skate. This particular song features the line: “And if strength is bord from heartbreak, Then Mountains I could move,” sort of telling the story of the Penguins rise over the past few years.

5. Go With the Flow – Queens of the Stone Age

This band has also been featured during the warm up for several years, with the most popular tunes being “Little Sister” and “3’s and 7’s.” This tune doesn’t really feature a line that holds any significance, however it will bore its way into your mind and stick there all night after you hear it! Josh Homme and his gathered misfits have long possessed the ability to write catchy tunes that sound like they should be being played live in your neighbors garage!

I was pretty fired up to hear some Megadeth playing in the arena this season…in fact they have even used the intro to “Hangar 18” at times during stoppages in play. Headcrusher is almost always used in the warm up. Though this tune features some hellacious shredding by Mustaine and company, it is one of my least favorite songs on the new album. I think it really comes down to the cheese factor of the name. I will say that it has been growing on me after hearing it several times on the Arena’s blaring system.

This tune if one of my all-time favorites and it has long been included in the pre-game warm up. They haven’t used it every game this season, but it has popped up several times this seasons. If you tend to arrive early for the game, there is no doubt that you have heard it before the actual start of the game or before the warm up.

This song was chosen for the opening montage that is shown as the players are hitting the ice right before game time and it is very appropriate. The band sings during the chorus of their debut single “The changing of the seasons is here now, is here now!” Which has definitely been the case for this team…you can see why it was chosen to be the theme for this year’s team…the band itself also has a definition on its website that fits what the Penguins have done over the last five seasons… “Veer – to change direction or change from one course to another. Union – a number of persons joined or associated together for some common purpose.” The Penguins young core came together, with one common purpose and changed the course of this franchise.

This was used for a “Don Farr Moves of the Game” segment and is just a high energy tune about what the Penguins try to do on a night to night basis…knock off another opponent. The song tells it like it is… “It’s been a long time coming, and the tables’ turned around, cause one of us is going, one of us is going down!”

Another “Don Farr” tune… just high energy “nu-metal” that sounds like P.O.D, Hollywood Undead and old Kid Rock had a child… from the sound, I would also call it music with a message.

“Ready to Roll” is just a catchy rock tune that has been used for a couple of montages detailing the Penguins highlights against that night’s opponent. I believe that it was most recently used in a montage showing the Penguins’ feats against the Florida Panthers over the years.

When Jane’s Addiction reunited a few years back for a new album, this was the first singles released. It is a cool song that grabs you from the moment Perry Farrell screams “Here we go!” to start the song off. The Penguins use it before going on the POWER BALL POWER PLAY! It was introduced during that year’s run to the Stanley Cup and it just sort of stuck!

This song has been used often this season during “Don Farr” segments and it immediately makes you want to leap out of your seat. If the opening riff doesn’t get you, then the opening monologue by singer Brent Smith will. These boys just hit upon a great hook in this tune and the style in which the lyrics are delivered over said hook is perfect. Perfect high energy music to fire up hockey players and their fans.

I still cannot believe that the Penguins are using a Dimmu Borgir during games, but I love it! This tune has sort of a grand opretic opening which is played as the a giant Penguins logo is drifting onto the screen and turning into position. It is very regal sounding with horns, synth and strings… the music cuts off just before you would come to the realization that black metal is playing at a hockey game!

Of course there are some additional tunes that find themselves being included in the Penguins game experience ie. Ride the Lightning by Metallica, which I figured that most folks would know.

As always, I am available to identify any song you might hear down at the arena…I have helped some of you out in the past. I remember a time when I was desperate to know the name of a song that was played and had no source for it.

This author has not added a biography. Meanwhile rlenocker has contributed 3 posts. Click here to view them.