Dan Scifo breaks down the Penguins big victory over the Edmonton Oilers Sunday afternoon at the CONSOL Energy Center.

PITTSBURGH — The Pittsburgh Penguins can ill afford too many efforts like the sluggish display put forth Saturday afternoon during a 3-0 home loss against the Montreal Canadiens.

That’s why a victory against the Edmonton Oilers 24 hours later was all that more important to the Penguins as they continue to reel in the Atlantic Division – and Eastern Conference – leading Philadelphia Flyers without superstar centers Sidney Crosby and Evgeni Malkin.

The Penguins pulled within three points of the Flyers as Chris Kunitz scored twice and Marc-Andre Fleury stopped 28 shots during a 5-1 victory against the Oilers at the Consol Energy Center in Pittsburgh.

“The guys that are hurt are a huge part of our team, but we’ve been playing good without those guys,” Penguins’ center Max Talbot said. “We know we can win and that’s what we’re doing right now.”

The Penguins are 14-11-4 without Crosby — out since Jan. 5 with a concussion — and 6-7-4 without Malkin, who had surgery on his knee in February and will miss the rest of the season.

They have kept pace with Philadelphia in the standings, though, using a gritty, relentless work ethic to accumulate points. The Penguins, however, appeared sluggish during Saturday’s loss against Montreal, but were able to rebound the following day against Edmonton.

“Rebounding from a game like that says something about our group,” Penguins coach Dan Bylsma said. “We need to get wins and that was a big effort after a poor performance on Saturday.”

A meeting with the lowly Oilers, who have the fewest points in the NHL and were without top scorers Ales Hemsky (shoulder), Sam Gagner (hand) and Taylor Hall (ankle), is just what the Penguins needed.

It started in the first period as Pittsburgh outshot Edmonton 13-2 one day after registering just five shots in the first 20 minutes against Montreal.

Fleury, who allowed three goals on 12 shots against Montreal, turned aside 28 of 29 Sunday and blanked the Oilers through two periods.

“It’s a long season and you’re going to have bad nights,” Fleury said. “You have to be able to put those behind you as fast as possible.”

He did just that as he kept the Penguins ahead by a goal with a split-legged pad save on Gilbert Brule in the second. Fleury also denied two quality scoring opportunities on Shawn Horcoff and Colin Fraser moments after Ryan Jones scored to make it 3-1.

“He has a strong history of rebounding,” Bylsma said.

The Penguins turned to their penalty killing unit to get things going in the first period.

Kunitz put the Penguins on the board 34 seconds later.

“The five-on-three really put the momentum in our favor,” Kunitz said. “When we killed that off, it got the building going and we played a little better to end the period.”

Tyler Kennedy intercepted a pass at the blueline and found Kunitz, who got the puck to his backhand before flipping a shot past Oilers’ goaltender Devan Dubnyk.

Kunitz also helped the power play break out of a funk.

His power play goal, with 3:49 remaining in the game, snapped a woeful 1-for-36 drought spanning the Penguins’ last 11 games. The Penguins, who were 0-for-22 before the goal, finished 1-for-6 on Sunday.

“That was really important because we’ve been struggling lately,” Kunitz said. “We haven’t been putting the puck in the net, so it was nice to bang one in.”

Talbot and Jordan Staal both scored their eighth goals of the season to put the Penguins ahead 3-0.

Talbot scored on a partial breakaway and Staal, who admittedly played poorly against Montreal, pounced on a Kennedy shot that squeezed through Dubnyk’s pads, diving to push the puck across the goal line. 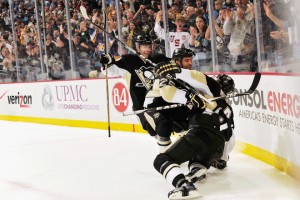 “It wasn’t my best effort against Montreal and I didn’t feel great with the way I played,” said Staal, who also had an assist on Sunday. “I wanted to come out with a better effort tonight and I’m glad things worked out.”

Jones made it interesting with his goal 1:09 into the third, but Penguins’ defenseman Zbynek Michalek ended the threat as his blast past Dubnyk’s blocker put the game away. Michalek lost his edge and fell into the boards celebrating his second goal in less than a week.

“I’m glad I could help the team win again,” Michalek said. “I don’t score often, so I don’t have many celebrations.

“I was just happy to score again.”

Notes: The Penguins were forced to play with five defensemen as Matt Niskanen missed the game with the flu… It was Edmonton’s first visit to Pittsburgh since Nov. 6, 2008. The Oilers haven’t won in Pittsburgh since Jan. 10, 2006… Penguins’ forward Matt Cooke registered his 300th career point on Staal’s goal…Kennedy finished the game with three assists…Sunday’s win marked the fifth straight year the Penguins reached the 40 victory plateau… Prior to Sunday’s outburst, the Penguins struggled offensively at home, scoring just eight goals in the past six games.

﻿***In addition to his work here at FTP, Dan Scifo is the Assistant Sports Editor for the Latrobe Bulletin.