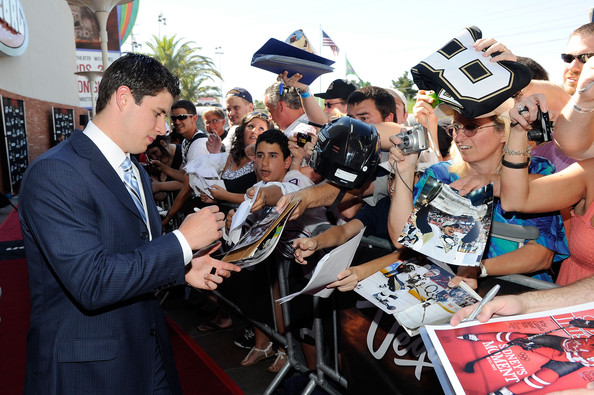 In light of the absurd story coming out of Ottawa this morning about Sidney Crosby having been arrested overnight, I figured I couldn’t sit on this any longer.

The guy has sticky fingers.

The Penguins captain once stole my pen and I wrote about it back on November 26, 2006 but it was time to resurrect the story.

Sidney Crosby is a Pen Thief! I am kidding of course, but I wanted to share a story that shows again the kind of person Sidney Crosby is. The other night when I was at the game, I am looking though my paperwork and taking some pregame notes. I get a tap on the arm and hear, “Excuse me, can I borrow a pen?” I look over my shoulder and it is none other than the injured superstar. I oblige and hand him my pen, the ONLY one I had with me. I always have an extra, but didn’t on this night. I figured that he would bring it back in a second, to no avail! However I was touched when I heard where he went with my implement. In talking to an usher who was in the area I found out that as Sid had been coming through the corridor there was a little girl in a wheel chair who lit up when she saw Crosby, and asked for an autograph. Sid didn’t have a pen and Metzer saves the day, and plays a small part in this act of kindness. Sid never made it back to me due to some other obligations and inadvertently made off with my pen. I thought it was a neat story and wanted to share it with you all.

I have always had some fun with this one, especially because the pen in question was a Christmas gift from my mother. Nothing over the top or engraved, but a better than average ink pen that I had kept in my bag so that I could look sophisticated while scratching game notes on a legal pad as I sat among the scouts and visiting media on the far right side of press row at Mellon Arena. The good news on this day was that a Penguins PR intern gladly provided me with another pen and I was good to go.

That seat provided me some really interesting interactions over the years, including a conversation with Brett Hull about Marc-Andre Fleury’s yellow goaltending equipment, but the Sid/Pen story is probably my favorite. It spoke to the kind of man he was becoming. He was just 21 at the time, but you could already see that he took his status and position not only in Pittsburgh but in the National Hockey League seriously.

Just figured that it would be a fun time to bring the story up again since I hadn’t told it for a while.

The arrest story was reported by the QMI News Agency at 3:24 AM, stating that “Pittsburgh Penguins centre Sidney Crosby was arrested by Ottawa Police late Tuesday while driving a rented Porsche, sources have told QMI Agency.”

The story has since been removed from their website, but inexplicably remains active on their mobile site.

The Penguins have issued a statement via email confirming that Crosby was nowhere near Canada overnight, let alone in Ottawa.

“The Pittsburgh Penguins have spoken to Sidney Crosby,” the Penguins said in a statement reported by numerous outlets. “He is not in Canada, and was not in Canada (Tuesday). He is continuing his training in preparation for training camp.”

The Penguins’ captain is apparently in Vail, Colorado going through said training.

The QMI News Agency issued a retraction at 11:22am and it seems that they are wiping quite a bit of egg off of their faces.

There was no basis for the story and QMI unreservedly retracts the story in its entirety.