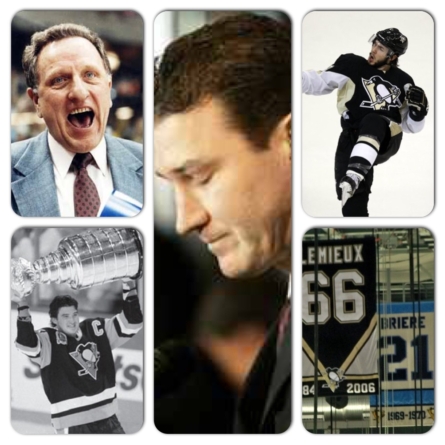 (Editor’s note – Vince Comunale currently covers the Penguins and National Hockey League for the Fischler Report and the Sports Xchange, he can also be heard Wednesday afternoons at 5:30 as he joins Penguins Live on Penguins Radio 24-7 to talk hockey with Brian Metzer)

By Vince Comunale
@PGHVC
Special to From the Point

The history of the Pittsburgh Penguins franchise has been one filled with both triumph and tragedy.  There have been three Stanley Cup championships, 15 scoring titles, and one Presidents’ Trophy.  On the other end of the spectrum, the franchise has been beset with tragedy and dire health diagnoses.

The tragedy began just three years into the franchises’ existence when promising rookie Michel Brière was killed in a car accident.  Brière’s first and only season with the Penguins was the 1969-70 campaign in which he tallied 12 goals and 32 assists, finishing third in team scoring with 44 points.  In the playoffs that season Brière led the team in scoring with eight points and even netted the first overtime goal in franchise to seal the Penguins’ first-ever playoff series victory, a 3-0 sweep of the Oakland Seals.  A little over a month later, on May 15, 1970 Brière was involved in a one-car accident in which he was ejected from his car.  After four brain surgeries and nine months in a coma, Brière passed away.  While nobody ever wore the number 21 again, it was not until January 5, 2001 that his number was officially retired and raised to the rafters of Mellon Arena in a pre-game ceremony.

The first two decades of the Penguins’ existence were rather lean, with the team even filing for bankruptcy.  However, with the drafting of Mario Lemieux and the slow build of talent around him, the Penguins finally became Stanley Cup contenders in the 1990-91 season.  They also found the perfect coach to lead them there in “Badger” Bob Johnson.  The Penguins reached, as Johnson put it, “the top of the mountain” and captured their first Stanley Cup championship in the spring of 1991.  Tragically, just three months later Johnson was diagnosed with brain cancer and died in November at the age of 60, a mere six months after he had guided the Penguins the to the  Stanley Cup.

While the Penguins continued to roll on the ice, capturing another Stanley Cup championship in 1992 and winning the Presidents’ Trophy with the league’s best record in 1993, more bad news came off the ice.  During the record-setting 1992-93 season for the franchise, Mario Lemieux made the announcement that he had been diagnosed with Hodgkin’s lymphoma. He underwent several aggressive radiation treatments, missing two months of the season.  Despite missing the two months, Lemieux still went on to win the scoring title.

Lemieux continued to have great success on the ice, however the years of ailments caught up to him and he retired at the age of 31.  Much to the surprise of everyone, he came back out of retirement on December 27, 2000 and once again was an offensive force, however his health problems continued as hip problems limited his play and eventually atrial fibrillation, which caused him to experience irregular heartbeats, forced him to retire a second time at the age of 40.  Despite all of his unbelievable individual statistics, a laundry list of injures and cancer only allowed for Lemieux to play in 915 of a possible 1,428 NHL games in his career.

The decade of the 2000’s best illustrated the highs and lows that have characterized the Penguins’ franchise.  Over the course of the decade the team filed for bankruptcy for a second time, nearly left town, and saw two of its former coaches tragically killed in car accidents, however the team also drafted Sidney Crosby, won a Stanley Cup, and made another Stanley Cup Final appearance.

In August of 2003 Herb Brooks was killed in a single car accident in Minnesota.  Brooks had coached the Penguins 1999-2000 and was the Penguins’ Director of Player Personnel at the time of his death.  Almost exactly a year later, former Penguins’ coach Ivan Hlinka was killed in a car accident in his native Czech Republic when his car collided with a truck. Hlinka coached 86 games for the Penguins from 2000-2001.  At the time of his death he was set to be the head coach of the Czech national team for the 2004–05 season.

In recent years the Penguins have had plenty of success on the ice, having made the playoffs eight-consecutive seasons, however, there has been plenty of devastating off-ice health news.  It began with Crosby’s concussion issues stemming from a blow to the head in the 2011 Winter Classic and sidelined him for 10 months.  During the 2013 training camp it was announced that back-up netminder Tomas Vokoun had been diagnosed with a blood clot that, had it not been caught when it was, could have been life-threatening.  Although Vokoun admirably fought his way back and even played some games for the Penguins’ AHL affiliate, he never played another game at the NHL level after the diagnosis.

In February of 2014 defenseman Kris Letang fell ill while the team was on a West Coast swing. When he went to get himself checked he was shocked to learn that he had suffered a stroke.  A small hole in Letang’s heart may have been a contributing factor.  He missed three months of the season while taking blood thinners and recuperating.  Thankfully, Letang has made a full recovery and should have no further health concerns from the stroke moving forward.

This season the Penguins rolled along with the same healthy lineup to begin the campaign for the first time in years, but in late October the team made the stunning announcement that young defenseman Olli Maatta was found to have a tumor in his neck during training camp and he would be having the tumor surgically removed.  It turned out that the tumor was cancerous, but Maatta was not required to undergo any chemotherapy treatments and he returned to the ice just two weeks after having the tumor removed.

Just as the good news about Maatta’s benign tumor was filtering in, more bad news was on the horizon.  On November 19 forward Pascal Dupuis was diagnosed with blood clot in his lung, which, like Vokoun’s, could have been life-threatening had it not been caught when it was.  This was actually the second blood clot that Dupuis suffered in 2014.  The first clot was found in his leg shortly after he tore ligaments in his knee that required reconstructive ACL/MCL surgery.  With this most recent blood clot he is expected to miss at least six months while he is on blood thinners.

Certainly every NHL franchise has had its share of triumphs and tragedies, but seemingly more than any other franchise, the Pittsburgh Penguins have experienced the highest of highs and the lowest of lows throughout the course of its history.