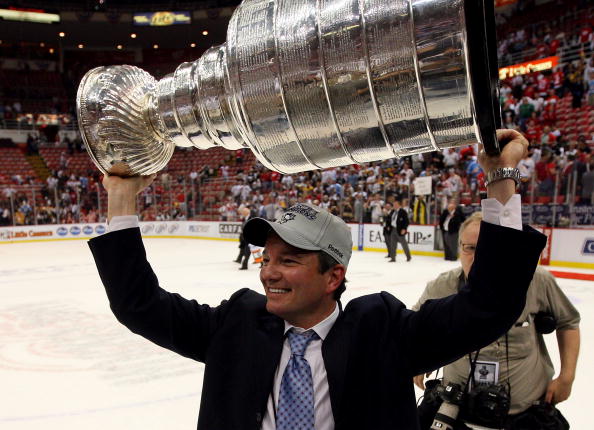 By most accounts Ray Shero has been very successful in his role as General Manager of the Pittsburgh Penguins. He has guided the birds from bottom dwellers to year to year contenders, just as he said he would upon his hiring back in 2006.

The Penguins have made the playoffs in each season that he has been has been charged with constructing the team. They have appeared in two Eastern Conference Finals, two Stanley Cup Finals and come away with one Stanley Cup Victory.

Shero has found a way to keep two of the league’s biggest and brightest stars in Pittsburgh, while keeping them surrounded with enough talent to make a realistic run at the Stanley Cup year after year, all while staying under the league mandated salary cap.

All of the above was rewarded this morning when the team announced that it has inked Shero to a five year contract extension. The new agreement will keep him with the Penguins through the 2015-16 season.

“This was an easy decision,” said co-owners Mario Lemieux and Ron Burkle in a joint statement. “Ray has done a tremendous job with our hockey operation – not only leading us to the Stanley Cup in 2009 but also building a team that can continue to compete for the Cup year after year.”

“In addition to his work with our on-ice product, Ray also has created a family atmosphere in our organization, where players know they will be treated very well,” said David Morehouse, the team’s CEO. “He is committed to having our players and coaches involved in the community and our charitable efforts, and helping to make the Penguins a positive asset to the Pittsburgh region.”

Shero, 48, built his resume in 14 seasons as an assistant general manager in the NHL – six with the Ottawa Senators and eight with the Nashville Predators. He played college hockey at St. Lawrence University, twice serving as team captain, and was drafted by the Los Angeles Kings in 1982. He spent seven years as a player agent before making the transition to the front office.

A native of St. Paul, MN, Ray is the son of the late Fred Shero, who coached the Philadelphia Flyers to two Stanley Cups and also served as GM and coach of the New York Rangers. They are one of the few father-son tandems to have their names inscribed on the Cup.