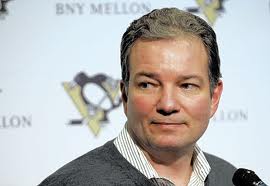 It has been a while since we’ve been able to run one of George Von Benko’s great interviews.

Between the lockout and the fact that he has been very busy with his obligations to the University of Pittsburgh’s women’s basketball program and writing great books, we just hadn’t been able to catch up. We finally got a chance to catch up a few weeks back and he informed me that his usual pre-playoff chat with Ray Shero was schedule and that we’d be able to get it up here on the site as we do on a yearly basis.

The two sat down together last week and Shero talked very candidly about many topics surrounding the Penguins as the season hits its conclusion. Here are a few of the highlights that I particularly enjoyed.

It was another outstanding chat between George and Ray Shero, but if you have listened to these in the past, you know that is pretty much the norm for George.

You can listen to the full interview via the player that is embedded below.

If you a fan of sports, which I am assuming that you are if you are reading this blog, then you should check out George Von Benko’s new book — “Sports Talk.” You may remember his previous efforts, which focused on a number of local sports icons, called “Memory Lane.” Well this one was inspired by a box of over 200 old taped radio interviews that George conducted with a number of national sports icons.

“Sports Talk” and Von Benko’s previous two books are available at all Bradley’s book outlets in western Pennsylvania, selected Barnes and Noble stores and at the Uniontown Public Library.

George is a sports historian and is always good for a story that I hadn’t heard before. You can here him weekly on his sports talk show on WMBS-AM radio in Uniontown that airs from 10 a.m. to noon on Saturdays.