The 84 Lumber Penguins Cup Champions of A, AA, and AAA will compete in the Pennsylvania State Hockey Finals Thursday against the Flyers Cup Champions. 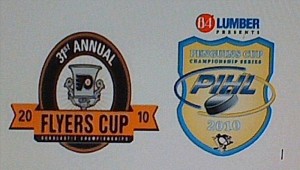 The 84 Lumber Penguins Cup Champions of A, AA, and AAA will compete in the Pennsylvania State Hockey Finals Thursday against the Flyers Cup Champions. The action kicks off at Mellon Arena at 11:00 am.

Here is the official release with all of the details on teams, times etc.

TO BE PLAYED THURSDAY AT MELLON ARENA

The Pennsylvania State High School Hockey Championship games, featuring the champions of the 84 Lumber Penguins Cup Championship Series battling the winners of the Flyers Cup, will take place on Thursday at Mellon Arena.

Class A action begins at 11 a.m. with Penguins Cup champion Mars (23-2) taking on Bayard Rustin. Mars, which is appearing in its second-straight championship game, defeated Serra Catholic, 4-1, in the Penguins Cup Final on Saturday.

Comcast Sports will be broadcasting all three contests. They will be available on PensTV On Demand beginning in mid-April. Steve Mears, Sam Kasan and Jason Seidling will be calling all the action.