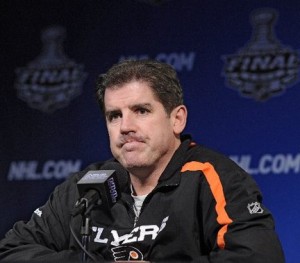 Chuckle if you must, since most of you feel that way anyway.  That was the intention.  Got it out of your system now?  Alright then…

The Philadelphia Flyers lost to the St Louis Blues on Saturday night.  4‑2.  To be honest, I fell asleep during the first intermission because 1) I was tired, and 2) the Flyers play on the ice was so uninspired that it rubbed off on me.  I had seen enough anyway; the defense was slow to react in their own zone, the forwards weren’t doing much to help them, and the Blues had enough energy ‑ despite getting into Philly after 2 AM following a game with Carolina the night before ‑ to take advantage of the Flyers’ lax play.

A little back story here:  Flyers Coach Laviolette tinkered with the lines prior to Thursday’s game with the Capitals, mostly to accommodate the call‑up of top prospect Brayden Schenn from the AHL for his first game in the Orange and Black.  The Caps handed the Flyers their first loss in regulation time this season, and Laviolette juggled his lines further in Friday’s practice session.

So, after the team’s 2nd straight loss (they’re now 4‑2‑1), a lot of fans blew a gasket.  Most of the concern is with Laviolette and his line‑shuffling, which is warranted; it’s reminiscent of his ‘goalie roulette’ decisions in last year’s playoffs, but I don’t think it’s time to call for his head just yet.  Scott ‘Down Goes’ Hartnell is another target, though some say he played a solid game last night (I’ve liked what I’ve seen from him the last few games).  Jagr’s been taking some heat recently ‑ he’s still without a goal, and he’s been looking a little tired and slow on the ice for a couple/three games now. Last night, Braydon Coburn seemed like his newborn daughter had instilled insomnia into their household and he was catching up on his sleep during shifts.

The thing is, and this has been going on for years, when the Flyers decide to take a game off, they do it as a team.  Every one of them.  And it doesn’t just occur when the lines are juggled, or after a big win or deflating loss…it can happen anytime, without warning.  That’s what kills me, and I was hoping with the ‘new direction’ the team is supposedly taking that I’d seen the last of it.  Nope.

The fact that they got off to a solid start, with victories over both of last year’s Stanley Cup finalists and a Devils team that has given them fits in the past, maybe the fans got a sense of invincibility, but the harsh reality is that this is a Flyers team coming out of a summer that saw a major overhaul to their roster.  I thought that we fans would be treated to a roller coaster ride this season, and this is just the first of what could be many drop‑offs that we have to endure.  A lot of fans already want blood.  I would preach patience, but that isn’t really a Philly thing, now is it?