The injury riddled Penguins face off against the Montreal Canadiens tonight at 7:00pm.

A new season is usually looked at as a rebirth of sorts, a veritable wiping clean of the slate and a chance to start over. The Penguins, like their 29 NHL counterparts, were hoping to do just that, but for as much as they would like to start a new, they just cannot seem to shake the injury bug. 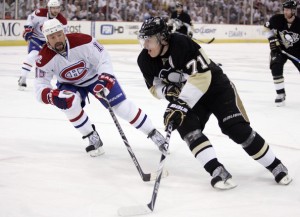 They are still dealing with the lingering injuries to Sidney Crosby and Evgeni Malkin, probably the two that affected the team most last season, and have grafted several others onto the injured list during the early stages of the 2011-12 campaign.

Sure you could make a case that both Crosby and Malkin are nearing their triumphant returns, heck Geno has already played a handful of games and done so in impressive fashion, but until they are each back on the ice on a full time basis there will be lingering concerns.

Joining the dynamic duo on the injured list are Tyler Kennedy and Brian Strait.

Strait was lost when he hyper-extended his elbow Tuesday night against the Minnesota Wild and will likely be shelved for several weeks.

“It’s not a very clear picture right now, but he hyper-extended his elbow,” head coach Dan Bylsma said. “There is some damage there.”

Bylsma said that the team hopes that the injury could be healed with rehab, but said that “he’s injured for some time.”

Though he will be missed as Kris Letang sits out the second game of a two game suspension this evening against the Montreal Canadiens, the team will get a bit of a boost in the form of Brooks Orpik.

Orpik, who has been recovering from sports hernia surgery, will make his long awaited 2011-12 debut this evening.

“It’s been a long time waiting, that’s for sure,” Orpik said. “Unfortunately we’ve had so many games so quick, I missed more than I thought I was going to miss. But just tried to be patient with it, and the team’s done a really good job here up to this point.”

Unfortunately the news wasn’t as good for Kennedy, who as suspected, was diagnosed with a concussion. Though all players deal with concussions differently, you have to suspect that Kennedy will miss at least a week…maybe more.

Head coach Dan Bylsma specified that Kennedy would not move forward until he is completely symptom free.

“Tyler Kennedy, after being evaluated in Manitoba and coming home to see our doctors and having those results, he does have a concussion and will not progress right now until he’s cleared of his symptoms – symptom free.”

As the injuries mount, so does the goal total next to James Neal’s name. Some feared that he would be out of the line-up this evening after he was held out of the skate this morning, but Bylsma cleared up those concerns.

“James Neal was not on the ice today, just maintenance. We expect him for the game tonight.”

The Penguins take on the Canadiens at the CONSOL Energy Center this evening, the puck drops at 7:00pm.