After a brief respite for the holiday, Malkamania again runs wild! Cy weighs in on a handful of burning topics including DJ Steve Porter, Bruce Boudreau and Max P.

So how was everyone’s Thanksgiving?  I hope everyone got their fill of turkey and stuffing like I did.  What a relief that I was able to eat like the rest of you.  The weight keeps going up as the choices of the food keeps expanding.  It sure beats Boost and Ensure, let me tell you.

I was surprised to see I was part of a Sidney Crosby Rap video by DJ Steve Porter.  I guess he liked the “Finally the Kid Has Come Back” sign that I had at the game.

Please, if you have not done so yet, stop out to Miracle Mile shopping center in Monroeville this week and see Mikey, Big Bob and Tall Cathy at “Stuff a Bus” and donate a new, unwrapped toy.  They will be there from November 28th to December 2nd.  Let’s see how many busses we can stuff for the cause.  No child goes toy-less!

Now for a little hockey talk and how the Caps just went from bad to worse with a choice in coach from Hagan-Dazs to a Meat Head.  Dale Hunter, second all time in penalty minutes.  Now here was a guy who had no self control and I look for the Ovechkin antics to resume on the ice ASAP.  The game this Thursday should be interesting to say the least.  I look for Washington to play “head hunter hockey” to send a message.  That’s OK Ted; you picked a guy to run your bench with 186 playoff games without winning a Stanley cup. Great choice… fits right in to your scheme of winning.  I’ll be waiting to welcome in your new coach in January. By then you’ll see your team is still lacking and that Vokoun is not a number one goalie either.

People were wondering why Scott Arneil was not fired in Columbus. A few reasons, Jeff Carter was hurt, James Wisnewski was suspended and, by the luck of a Rick Nash shot in practice, Steve Mason is out.  So that means a guy two years out of the NHL, Curtis Sanford, has a 1.38 GAA and .947 save percentage in seven games.  So by the luck of a shot, Columbus brass is finding out Mason is not your number one.  I kind figured this out a few years ago.   What took them so long in Columbus?

I don’t have too much to say about Max Pacioretty  except after all the crying about Zdeno Chara, he of all people should know better about respecting another player. Well Max, you are no better than Chara in my book.  So the next time someone creams you, remember what you did to Letang. 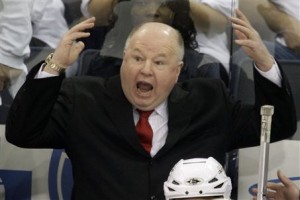 Winter classic jerseys… just what were the Rangers thinking?  I for one am not thrilled with the design, reminds me of the Espo jerseys when he played.  And the Flyers ones are worse.  They just love those Jack o’ lantern colors don’t they?  What’s with the poor excuse of the Philly old timers’ roster? Mark LaForest and Neil Little?  Hey I guess so many goalies got run out of town no one wanted to come back.   If you blinked your eyes and said Bryzgolov you missed the career of Neil Little.

I leave the end of my column to Bruce Boudreau.  Boy will I miss this guy. I think my sign collection now will be cut in half. (Just kidding)  But if there was someone I enjoyed spoofing on it was good old Bruce.  Too bad it was short lived.  I’m sure the new Ted Puppeteer will inspire plenty of new material. In fact, the “Fragile” jersey was used as a Turgeon jersey back during the Hunter check.  Oh well….that’s the circle of life.