Don’t call it a comeback, he’s been here for…. months? Cy is back with another Malkamania Running Wild!

Well, as soon as I put away the “Pin the Wing on the Boudreau Game” I find out he’s back with Anaheim; after a win, none the less.  So Saucy Face was out of a job for two days.  What is the fascination with him?  Then Michel Therrien has yet to find work… maybe people didn’t like to be called “soff”.  But, what about Lindy Ruff?   I am wondering what he has done to keep his job.  His Stanley Cup appearance is back when I had hair on the top of my head and the last four years have been either no playoffs or out in the first round.  New ownership, I look for that to change.

It’s the new look Capitals tonight with Head Hunter behind the bench. I look for it to be thuggery at its best, and would be surprised if Hunter has them play hockey.  I’ll be with a bunch at Carnivores in Oakmont tonight watching, while Jessica, Chelsea and Sean are at the Verizon Center bringing us home a win!

We are down to a week away from our first meeting from the Flyers. A bunch of us are going up on a bus to watch and there are a lot of people buying tickets close by where we are sitting.  It looks like we are going to have a great time!  I can’t wait until the first “Crosby Sucks” chant and then he scores. There will be a lot of “stunned pics” to be had.  No Pronger, but hopefully “Mr. Groin” and ”Fondly” will be in the lineup.  Got to see that Rocky statue; Philly’s God of hope.  Got to wonder if Mike Vick and Bryz did their Rocky impersonations.  No wonder they both are failing.

Is anyone else impressed with the play of Deryk Engelland?  He has 8 points, same totals as Paul Martin, and Engo is a +4.  I see him a lot lately joining the rush up ice and getting off some good shots. When or where did this all come about?

I’m seriously thinking about a WB Pens trip in February (Shoez and Russ) so for those who go and make these trips, what is there to do up there?  How are the fans? Are the games entertaining?  The reason I ask it’s been a long time since I saw a minor league hockey game. Drop me a message on here on my FB or Twitter accounts.  I would appreciate it greatly. 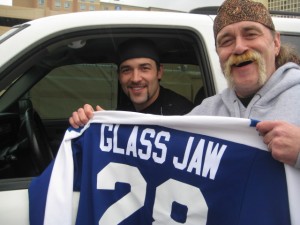 If you were to choose to retire a few number 0n the Penguins whose numbers would you choose and why?  Or do you think no one is worthy of having the team do this?  I know as far am I’m concerned, no player wore 68, it’s like that never happened.

On to some other stuff, again, don’t forget Stuff a Bus at the Miracle Mile Shopping Center in Monroeville. Let’s make sure this year no child goes toy less.  Imagine when you were a child and how horrible it would be to wake up to no toys on Christmas morning.  All you have to do is give up a pack of cigarettes, a latte, or a few cocktails at a bar. Not asking for huge toys but something to make a small child smile on Christmas Day. Stop by and say Hi to Big Bob, Mikey and Tall Cathy. They do a super job in what they are doing!

Last but not least, a special thank you and shout out to John Tamburriello, Colleen Shaeffer as well as my wife Joanne and Amy Smith the decorator and for all of you who came to surprise the hell out of me Tuesday at Fox and Hound.  I was totally fooled, as those in attendance could see by the look on my face.  I thank you all for coming out. That was real nice of you and I’ll never forget it.  And yes, who were those four girls in the back???  See you next week!

Figured that this would be as appropriate a spot as any to post the latest masterpiece from our pals Benson over at Benstonium! He dropped this epic piece of celluloid in my inbox this morning and I just had to share it. I am sure most of you have seen it, but it meshes nicely with Cy’s piece: