Malkamania is back with a collection of thoughts, comments and insights on what has been going on in and around the league and the Pittsburgh Penguins.

Don’t you find it amusing that the last three coaching changes did not result in instant success?  Looks like Kirk Muller, Dale Hunter and Daffy Duck have their work cut out for them.  In Minnesota’s 5-3 win over the Ducks Sunday night Nick Johnson got the game winning goal. Another Penguin Bruce yells a few expletives in the locker room.  February 15th is going to be a hot ticket. 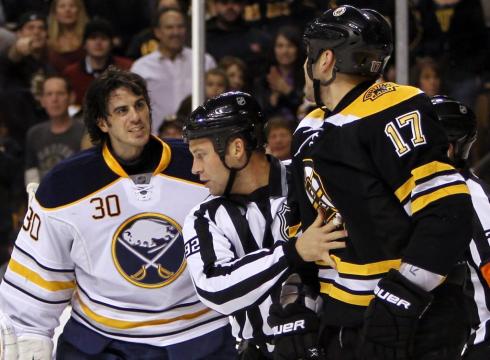 Does Ryan Miller have a bull’s-eye on his chest?  First it was Lucic crushing him and then his first game back Jordan Tootoo creams him in the crease.  Shannabanned better get this right, this clown should be sitting for about no less than five games.

At the start of December Matt Cooke has racked up only eight penalty minutes.  Well for those of you who were not believers that he is a changed man, I guess you owe Matt an apology.  But I will say this, if the cheap shots keep coming and no one does anything about it, he is going to snap and it could get ugly. To be honest I think they are testing his patience.  Anyone who says that there was nothing wrong with the last hit must have watched another tape.  I still cannot believe it will go unpunished.

Can you believe the start by Pascal Dupuis? He has more points and goals than Ovie! I say leave him and Kunitz alone and let them play with Sid for now. He is on pace for 64 points this season. What a bonus this would be for the Pens!  Hopefully he can keep up the pace!

As far as realignment goes and all of these goofy scenarios everyone and their mother is coming up with, two divisions of seven and two of eight teams and then we can bring Quebec and Hartford back??  You can quit playing Brass Bonanza; this is not going to happen.  The only one that makes perfect sense is switch Winnipeg with Detroit… end of story. Nothing else matters at this point; anything else is just living in a dream. (Malkamania will share his thoughts on the realignment news that broke between his submitting this piece and it’s posting on Thursday. – Metz)

Do you believe the demand for the Penguin ornaments?  15,000 sold the first day alone. Wonder what the new count is, considering they are saying you order now you will get it the first of the year?  There are only 14 staffed to make these, better line up 42 more I say.  But when Christmas comes to an end, what do you think they will make out of the steel next?  Picture frames?  Key Chains? Commemorative tickets from the first game???  You know marketing is busy coming up with something.

Steel City collectibles has a nice idea for a Christmas gift for the Penguin hockey fanatic.  They are selling the 1984 Vintage Mario Lemieux jersey, the rookie year yellow one. Sure brings back some memories.  Remember how they had the yellow helmets to match?  Most of you who read this are like huh?  So good to be young again.

Does anyone know of any upcoming signings by the Penguin players?  If you do, please let me know on facebook or twitter @Malkamania71. This would be greatly appreciated.

If anyone is looking to travel to New York and seethe Pens play the Rangers and the Devils plus celebrate St. Pats day in NY get in touch with me or Amy at Thomas Tours 724-337-9000. Should be a fun trip and St. Pats day in new York at Foleys Bar with Psamp, Stan, Allison, Mattie and the gang will be a blast.

One last thing, Philly trip is in 2 days, so I may need to start a fund for my bail money, we’ll have Metzer in charge just in case I run into some trouble up there. Take care!