As you have come to expect…Jon Jordan and I are back with another round of questions following Game 1.

As you all know by now, Jon Jordan of the great Beasts of the SouthEast blog and I have been collaborating on our coverage of the Penguins/Lightning series. We answered a series of questions for one another prior to the series kicking off last night and will be returning with several more after each game. Here are the questions I had for “JJ” following last night’s Penguins victory and his insightful and informative answers.

BM: Though the has been much talk about Zbynek Michalek’s uncalled high stick on Marty St. Louis, it seemed that the Lightning played a bit undisciplined themselves. I am not saying that based solely on their seven penalties, but on the fact that it seemed that they not afraid to play rough and or get their sticks into guys. What is your take on the situation? Was that due to the fact that they do not fear the Penguins power play at all?

JJ: It’s no secret that the Lightning need to avoid going shorthanded six times, like they did last night, looking ahead. As Coach Boucher talked about, even though Pittsburgh didn’t score, that changes your team’s approach and is so taxing on the penalty-killers. It affects the whole team. The Lightning couldn’t really get into a flow because of a constant parade to the box.

They can play a physical game and, you’re right, aren’t afraid to go that route but the bottom line remains that they have to be careful about getting into penalty trouble. No doubt that played a factor last night.

As for not fearing the Pittsburgh PP, I don’t think that had much to do with their approach. In fact, this team has been very focused all year long on playing their game, rather than worrying about the intricacies of a particular opponent. Granted, every team has certain tendencies that need to be accounted for but, for the most part, the Lightning would employ similar tactics, regardless of the opposition.

BM: Guy Boucher admitted during his post game comments that Steven Stamkos and some of the other Lightning pups were a bit nervous heading into their first playoff game. I know that we discussed their youth yesterday, but how much of a factor was that playoff inexperience last night? Did Boucher do the right thing in preaching the fact that this was merely game 83 and that it would be no different than the regular season?

JJ: I wouldn’t say it took him off of his game but that was some welcoming to the postseason from Brooks Orpik that Stamkos received, huh? Yeesh.

Stamkos looked on par with how he’s fared down the stretch of the regular season, which was not well. He managed just a single shot and the Pens were nasty to him all night. Bottom line, though, is he can expect more of the same. He and the Bolts are going to have to figure out a way to make more of an impact, period. That said, I don’t think his lack of playoff experience at the NHL level played much into his own personal end result – he just hasn’t been all that great lately. Game one was more of the same.

Overall, I didn’t see much from the younger players that caused me any concern. I thought Victor Hedman was solid, as was Mike Lundin – two defensemen dressing for their first career playoff games. Rookie Dana Tyrell wasn’t a huge factor, nor was he a detriment, though, playing the least amount of minutes of anyone on the Lightning roster. Sean Bergenheim took a tripping penalty in the third period (on Orpik, I believe) that can’t happen. That was after the two goals were scored by Kovalev and Asham and put the Bolts back on the penalty kill at a time when they needed to sustain some offensive pressure. He (or anyone) can’t be taking those kinds of penalties at that time, or any really, and that couldn’t have made Boucher happy.

If there’s one thing this coach has been all year it’s consistent so, that game #83 approach will evolve into game #84 and so on and so forth. The kids – and the team as a whole, really – got the first playoff game and whatever jitters come along with that out of the way.

That might be the biggest positive the Lightning can take out of game one, in the end.

BM: Generally speaking, when Montreal knocked off the Penguins last season; they did so by taking the middle of the ice away from the Birds. They would drive the play to the boards and or corners and allow shots from the outside but wouldn’t allow the Penguins forwards to get inside the “box.” The Lightning seemed to do this during the first period last night, which coincidentally was their best. Did you see a concerted effort to employ that strategy? Did Boucher use the MTL plan as sort of a recipe for what his squad needs to do in this series? 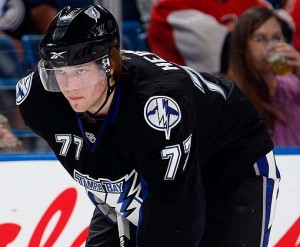 JJ: Well, you know Boucher came from the Montreal organization, I’m sure… Still, I can’t say he copied anything directly, though it’s probaby safe to say he’s seen extensive tape of Pittsburgh in their last playoff action, along with the thousands of other hours of video he’s surely watched.

In general, I thought the Lightning did a good job of limiting quality scoring chances in the first, as you’ve indicated but, as the game wore on, they got away from that. Middle-of-the-ice or not, they loosened up, particularly in the third where, aside from the Kovalev goal, there was another instance where the Pens were able to get behind the defense for an excellent chance. The time spent on the penalty kill could have played a factor here as well. Hedman, Lundin, Eric Brewer and Mattias Ohlund all played extensively with the Bolts down a man and that may have worn on the entire group down the stretch, opening up some lanes for the Pens, who capitalized twice – more than enough when you have Fleury doing what Fleury did last night at the other end.

All in all, I expect a similar contest in game two and one that, again, can go either way. A couple of breaks here or there and the Lightning take the lead last night, rather than the Pens. That happens and the rest of the outcome is all kinds of up in the air.

You can follow all of Jon Jordan’s work over at KuklasKorner – Beasts of the SouthEast. As for the above referenced “delicious and cold adult beverages?” I am taking him up on that!