So who is the MVP now? Sid was the runaway winner IMO until the injury.

Regardless of who you cheer for this injury to Sid is not good for the NHL, the NHL is a much better place with Sid playing.

The NHL is NOT a better place with Trevor Gillies playing; enough of the pure thugs please.

The Sharks all of sudden seem different; they may actually make some noise this post season. 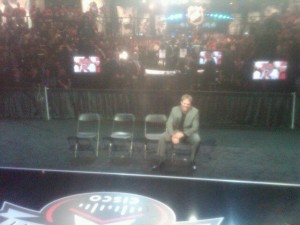 Ov back on twitter, tweets a picture from the stage at the ASG of Kessel by himself on stage as the last guy picked, come on OV show some class.

I guess I seem to pick the same guys in my hockey pools; I have about 10 guys on the IR in each pool, that’s some tough luck.

Nike is saying BOOM now; Biznasty may need to look into this.

Speaking of Biz, not sure about the Yotes trade of Upshall and Lepisto for Klesla, I like that from the Jackets side of things.

If you were a wrestler would your manager to be Slick or My Fuji?

Gary Bettman would like you all to welcome the AHL’s newest franchise the Florida Panthers.

I have no clue what this Pitbull guy is singing about but I like him, very odd since I’m a metalhead \m/

Brad Boyes typical hot streak after the trade but will slow down in about 8 games, streaky player.

Nabokov you should have reported to the Islanders, they’re on the right track!

I haven’t heard a word from any Leafs fans since 2004, now they’re everywhere again, plan the parade!!

Kris Letang, do you miss Sid and Geno, the stats tell me you do.

Have a great weekend hooligans.