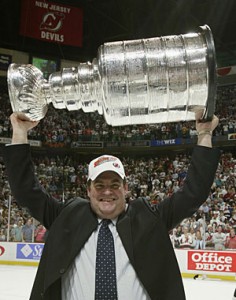 RIP Pat Burns. As good a hockey man as you could find. I have attached a link to story Bob MacKenzie shared about the former coach, it’s a must read.

As of Friday afternoon Teams 1-13 in the West are separated by 6 points. I’d say points in October and November are important after all.

If you’re soon to be RFA Zach Parise do you want to stay in New Jersey? I’m not sure I would.

Giroux, Semin and Letang all left of the all start ballot? 3 of the games most exciting players, get it together NHL.

When the Bruins move a big salary and they will I wonder if they’ll have to include Wheeler as a sweetener.

New Kids on the Block and Back Street Boys touring together…………………..jump the shark much!!

How did the Hawks win the Cup with Antti “Public” Niemi in the pipes.

It takes a big man to trade his son; the Sutter’s are a different breed!

The mustaches for prostate cancer look great on some players; I’m talking about you Ryan Malone, classic look.

The first testicular guard, the “Cup,” was used in Hockey in 1874 and the first helmet was used in 1974. That means it only took 100 years for men to realize that their brain is also important. 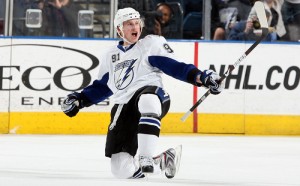 Stamkos is now on pace for 82 goals and 151 points, that is unreal.

The Leafs had their skills competition last Sunday, I guess the dump and chase and chip it off the glass skill is all they can do.

The Bruins have a great problem, Rask or Thomas? Doesn’t matter both are playing great.

Is this the year of the young D-man? Letang, Liles and Whitney are all having great starts.