Thoughts and observations from Raleigh! 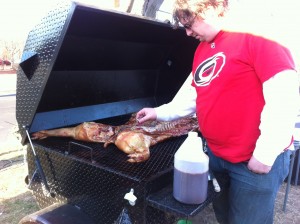 I haven’t been able to blog as much as I had wanted to while attending the festivities in Raleigh this weekend… who knew that Versus was actually going to keep me this busy! I typically have a handful of responsibilities, but have plenty of time for my own things… not the case this time around.

We have spent the past couple of days filming a ton of interviews with vendors, players, fans, tailgaters etc. It has been a blast and we have met a bunch of amazing people. I am now sitting in the media work room at the RBC Center preparing for our live chat this evening over at Versus.com (please come by if you are available) and wanted to give you some quick hits…

Raleigh has been great, the city has embraced the league and looks a lot more like a hockey town than I had imagined. For everyone that thinks that this crew is about nothing but football and NASCAR, you are mistaken. There are some hardcore hockey people here.

Last night’s All-Star Fantasy Draft was a blast… I really enjoyed it and hope that it stays moving forward. It definitely made the All-Star selections exciting again and gave it a school yard feel. I don’t think there is a fan out there that doesn’t remember standing there waiting for their name to be called by the team captain. Being chosen last overall seemed to suck just as bad for Phil Kessel as it would have for anyone of us back in the day. 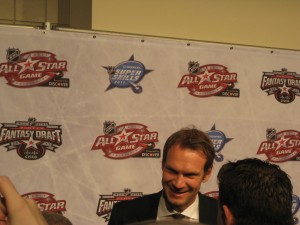 Nick Lidstrom, Eric Staal and their alternate captains really seemed to have a great time with the team selections. There were able to have some fun with their friends by selecting them, or in the case of Jonathan Toews and Marc Staal, making them sweat it out.

As part of my Versus assignments this afternoon, I was able to catch up with both Taylor Hall and Tyler Seguin. I had previously spoken with both of them during the Stanley Cup Finals last spring and it was neat to see how they each have matured and grown since then. They were better spoken and a lot more comfortable with all of the fanfare. Seguin talked about how much his life has changed and how he has had to make adjustments such as living alone in the city, doing dishes and keeping an apartment. Really puts it in perspective… these guys are youngsters!

Believe it or not… the Guardian Project has grown on me. I wasn’t really interested in it prior to coming to Raleigh, but after seeing all of the hoopla around it, I actually like it!

I will have more thoughts etc later tonight…gotta get moving to the chat! Hope to see you all there!