We are about a week away from the rumors and trade talk catching up to this summer heat! Here are five teams that are in for an intriguing off-season…

(Ed note: Little did Ryan know when he wrote this blog that Montreal would be one of the “others to watch, as they traded Jaroslav Halak to the Blues this afternoon to kick off what is sure to be a fun couple of weeks in and around the National Hockey League!)

We are about a week away from the rumors and trade talk catching up to this summer heat!  Here are five teams that are in for an intriguing off-season…

The Kings have two things you need to make an off-season splash: cap space and a desire to win – now.  They have 16 players tied up for $44.7 million, which would leave approximately $15-16 million to spare come July 1 (depending on what the final cap number is).

Who could be making their way to L.A.?  The popular name is Ilya Kovalchuk.  The Russian superstar will likely reel in around $9 million a year on a long-term pact.  Should GM Dean Lombardi take that risk, taking into account the contracts that guys like Doughty, Johnson, and Simmonds will need next summer?  That’s a hard decision to make, considering ‘Kovy’ could put this team over the top.  Other names that could interest the Kings’ GM are Patrick Marleau, Tomas Plekanec, and Dan Hamhuis.

If Lombardi fails to bring in any of those high-profile free agents, look for him to add on to the depth with both forwards and defensemen.  The possibilities are endless in Los Angeles, as they look to put together a team that is more than just a playoff contender. 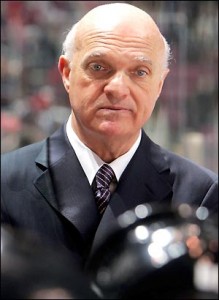 Is it possible that GM Lou Lamoriello keeps everything together by re-signing Kovalchuk AND Paul Martin?  Absolutely.  On the contrary, however, if they both leave for greener pastures, Lamoriello has some work to do.

Whether Martin re-signs or not, the blueline needs a makeover.  Dan Hamhuis and Anton Volchenkov have to be on their radar, or maybe even Tomas Kaberle in a trade.  Something has to happen defensively for the Devils to three-peat as division champs.

The uncertainty surrounding Kovalchuk’s future will go right up to July 1, putting the Devils in a bind.  Down the stretch and into the playoffs, I honestly don’t believe Kovalchuk wasn’t the problem.  Yeah, he’s not the best fit in Jersey… but he worked hard and brought a scoring threat to the team they’ve never had before.  If he opts to sign elsewhere, Lamoriello may want to look into a quality second-line center (someone of Matthew Lombardi’s ilk).

Most off-seasons, New Jersey just stands pat and watches the dominoes fall.  Not this time around… heck, they may even deal their Hall of Fame goaltender, and face of the franchise, Martin Brodeur!

Even though Philadelphia made a long, unexpected run to the finals, changes could also be on the horizon for them.  The biggest domino to drop will be what GM Paul Holmgren decides to do in net.  The two goalies with contracts for the 2010/11 campaign are Brian Boucher and Johan Backlund – neither of whom should be the starter.

Does he trust Michael Leighton after a good second half?  It’s not often when you see a goalie from a Cup runner-up be left behind by its team; but that scenario looks likely at this point.  If Holmgren doesn’t re-sign Leighton, then who does he turn to?  My money is on one of Marty Turco, Dan Ellis; or Carey Price/Jaroslav Halak through trade. 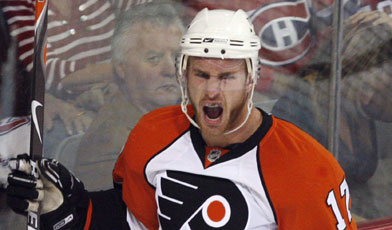 In any of those circumstances, Holmgren will have to create cap space to sign that goalie (and other depth needs).  The hot name on the rumor mill to be dealt is Jeff Carter.  Carter is a natural center that is playing wing instead because of Richards and Briere.  Putting him in a trade in exchange for picks, prospects, or a goalie would make a lot of sense.  He’ll be valued because of his potential and the fact that he has just one year remaining on his contract.

For the past few years, the Flyers have been up against the cap and unable to make a move.  Now that they have Giroux and van Riemsdyk in place, a big talent like Carter is expendable for other future pieces/needs.

Two of the franchise’s mainstays may be hitting the open market in a couple weeks: Evgeni Nabokov and Patrick Marleau.  For the last decade-plus, these two have been bringing Sharks fans out of their seats.  Now, the organization is staring at the possibility of losing both at the same time.

If I was GM Doug Wilson, and had to decide between one or the other, I’m keeping Marleau.  He obviously hasn’t been the ‘problem’ in San Jose’s annual playoff letdowns.  Marleau is a big part to the team’s success.  So is Nabokov; but of anyone, he deserves most of the blame dished out.  Nabby has been soft in recent postseasons, letting in the leaky goals that can cost you games.  Marleau will cost more, but is more valuable to the Sharks.

Whether it’s for better or worse, the Sharks just may look like a different team next year.  What would GM Doug Wilson do if both stars parted ways?  He’d have a lot of cap room to shore up the defense and/or find another sniper for Jumbo Joe and Heatley.  San Jose will be active once again this summer! 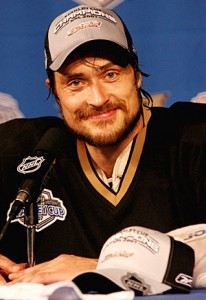 Anaheim is lying in the weeds as a sleeper team this off-season; because if Scott Niedermayer, Teemu Selanne, and Saku Koivu all retire or sign with another team, they will have a ton of cap space to work with.  In fact, the Ducks are almost $20 million under the cap as of right now (with 19 players signed).

That is a whole lot of dough to sign just one or two players; granted, they won’t be a team to reach the cap’s ceiling.  GM Bob Murray also has to find a way to re-sign RFA Bobby Ryan – one of the league’s special young talents.

With that being said, Murray could be in a position where he could sign or trade for anyone he wants.  Why would Kovalchuk not want to play alongside Ryan Getzlaf and Corey Perry?  Talk about one helluva top line and power play unit!

There are other options for Murray to explore, too.  If Niedermayer goes, then the Ducks may suddenly become a player for Volchenkov’s or Kaberle’s services.  I’m sure they’d also like to bring in some depth down the middle.

Anaheim is in a pretty good position, with a fair amount of cap space and not too many needs, to be busy these next few weeks.