In my last entry, I recommended to the Blackhawks that they avoid the penalty box to make things easier on themselves. They didn’t heed my advice. 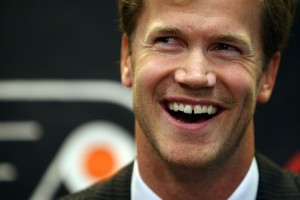 In my last entry, I recommended to the Blackhawks that they avoid the penalty box to make things easier on themselves. They didn’t heed my advice.

They did me one better – they came out in game 5 like gang busters and kept the Flyers on their heels for most of the first period while shoving 3 goals down the Flyers’ collective throat. Chicago coach Quenneville split up his top line from the first 4 games of the series (Kane, Toews and Byfuglien) and gave them each a line of their own, and the ‘Hawks responded by playing the best period of hockey by either team in this Final.

I’ve got no advice for them heading into game 6; they’re on their own. They don’t listen to me anyway.

By now we’ve all seen (or at least heard about) the Chris Pronger poster in the June 8th print edition of the Chicago Tribune. It has been deemed sexist and childish, and the Trib has been accused by many of resorting to tabloid journalism. A lot of the criticisms have come from Flyers fans, though it is in no way limited to them.

“I’d like to see that editor out on skates. I’ll take them one on one on the ice any day,” three time Olympic medalist Angela Ruggiero told The Associated Press. “They obviously have never seen women’s hockey and are living in the dark ages.”

Ruggiero found out about the poster via Twitter and expressed disappointment and anger that such demeaning portrayals of women and hockey are still being made.

“For her and others who took offense, I apologize. No qualifiers, I’m sorry,” Chicago Tribune sports editor Mike Kellams said in an e mail. “We were just having a little fun with a guy who has come to personify all that has gotten under the collective skin of Blackhawks fans. Pronger is talented that way. And we were trying to connect to that emotion in a fun way.”

I gotta tell you that when I first saw it, I lol’d. Literally. Pronger does get into people’s heads and under their skin (and any other place he sees an opening), and I’m with Mr Kellams in that I would have run with that poster too, if it were my choice whether to include it in a paper. I guess that makes me sexist, too, to some. All I have to say that is, “Oink.”

Hockey players are the most down-to-earth professional athletes around, and I’ve had my share of encounters with them. I once shot a game of barroom pool with Brian Propp, and I shared a few rounds of drinks with another ex-Flyer, Derrick Smith, on another occasion. Happens to everybody, right? But I had never been in the vicinity of a player that was just traded – and I mean, “just” traded. Here’s what happened (some of you will be familiar with this one, as this is not the first time I’ve told the story) –

The scene is Toronto in December 1998 it is the final season of Maple Leaf Gardens as the home arena for the Leafs. My girlfriend at the time was a member of the Flyers Fan Club, which made the trip to see the Flyers’ final game on the sacred ice, and we joined them. It turns out that we stayed at the same hotel as the team…

The trip included passes to the Hockey Hall of Fame, and we made our way there the day of the game. Upon our return, we saw the television broadcast team of Jim Jackson, Gary Dornhoefer and Steve Coates loitering in the lobby. Coatesy lives in my general area of South Jersey (and I run into him occasionally at local watering holes), so I said hello when our eyes met. His eyes lit up and he asked, in his inimitable way, “Hey! Did you hear about the trade??” We had been out all day, so I said, “No, what happened?” Coatesy says, “Chris Gratton and (Mike) Sillinger to Tampa Bay…we got (Michael) Renberg back and Daymond Langkow.. It just happened.”

I had never gotten word of a trade anywhere but from a newspaper or the internet before this, so this was a scoop. I told Coatesy we had to go upstairs and dump our HHOF goodies in the room, but I would come back down and talk to him some more, and off we went to the elevators. As the elevator door opens, out storms Sillinger, bags in hand and obviously very unhappy. He nearly bowled us over and was grumbling loudly but incoherently. I turned and wished him good luck, but I don’t think he was paying me much attention. He had a plane to catch… : )

Okay, now let’s hear yours. Tell me a story…

** Tangent Man — Keith Filling… a fantasy and NHL hockey junkie who has a lot to say about the reality of life experiences, Scotch, hockey, music and the bane of being addicted to a fantasy game. Read more of his work over at his “Off on a Tangent” blog. You can also follow him on Twitter here.