What better way to debunk an rumor than to get the info from the horses mouth and that is exactly what Rich Chere of the Star-Ledger did this morning. 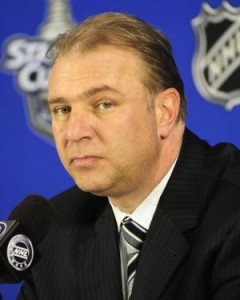 What better way to debunk an rumor than to get the info from the horses mouth and that is exactly what Rich Chere of the Star-Ledger did this morning. Chere filed a piece this morning featuring some quotes from Lamoriello on the situation.

Lou first denied that the team  has offered its coaching job to Therrien… or anyone else for that matter as of yet.

“We have not picked a coach yet,” Lamoriello said this morning. “There has been no decision on anything yet. There are reasons for that.”

The popular thinking is that he would like a chance to talk with Blackhawks assistant coach Mike Haviland who is still involved in the Stanley Cup Finals with his team. However, it could just be a matter of taking his time to make a prudent decision.

Chere listed the candidates who are thought to be in the running for the job and gave his opinion of what Lou could be thinking with each.

At this point, this seems to be the list of candidates in order of probability:

2. John MacLean. He coached one season at Lowell (AHL), but the GM may not feel he is ready.

3. Haviland. A native of Middletown, there have been rumblings during the Stanley Cup finals that the Devils want to talk to him.

4. Kirk Muller. He virtually ran the Canadiens during their playoff run and would like the job. But he’s never been a head coach in the AHL or NHL and that is a negative in Lamoriello’s eyes.

5. Ken Hitchcock. He’s got the experience and toughness Lamoriello likes, but he nows seems to be a long shot.

Chere also states that Lamoriello originally stated that the team wouldn’t have a coach in place before the NHL Entry Draft, but that face could have change.

“It’s always a possibility,” Lamoriello said. “It could happen, but it’s not definite.”