Over the past couple of days I have really been kicking around the idea of getting a new “Just Saying” blog up for you guys. 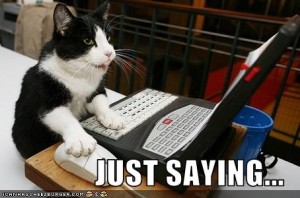 Over the past couple of days I have really been kicking around the idea of getting a new “Just Saying” blog up for you guys. They were always one of my favorite things to write over at my old locale and I have yet to do one here at FTP.  Then my old friend Mag66 called me out for not having done one here and accused me of abandoning my roots! (It was quite that dramatic…more a call to arms for something that he always enjoyed reading!)

I simply cannot be accused of abandoning my roots and the things that folks who read this website had come to enjoy over the years…plus it allows me an opportunity to get a ton off of my chest at once, while also paying homage to one of my favorite bloggers…the Talented Mr. Roto — Mathew Berry over at the Worldwide Leader.

So without further adieu… I am Just Saying…

…that I am still shocked that so many folks picked the Penguins to knock off the Canadiens in five or less games, you guys do know that they eliminated the Washington Capitals, right? I still think that the Penguins will win the series in six as I predicted here, but if it goes to game seven, worry should set in.

…that RDS.ca must not have heard that Jordan Staal is a complete MANSTER! The kid overcame a lacerated tendon in his foot that required a surgical repair and was skating in just under a week and looked great for a player is out for the remainder of the playoffs.

…that if you are confronted by a person who says that Marc-Andre Fleury has not lived up to his first overall draft selection because he isn’t in the Vezina conversation year to year, you need only ask: “Where are this year’s finalists?” That’s right… shaving their beards, because their already home. The kid has 37 playoff victories over the last three seasons, two Stanley Cup Finals appearances and one ring… all before the age of 25. I would say that qualifies as having lived up to the first overall draft pick… Wouldn’t you? 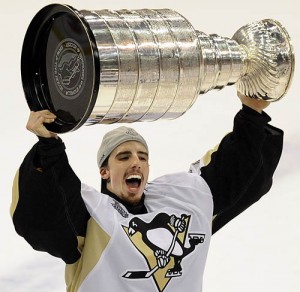 …that there is one thing that Sidney Crosby isn’t good at on the ice — growing a playoff beard. Look for him to work on that during the offseason, as he tends to do that with flaws in his game from year to year.

…that I still believe in a Wings/Penguins final… 3 for a buck – this one for all the marbles. Especially after watching the Wings completely dismantle the San Jose Sharks last night at the Joe. In a way, I was thrilled to see it, as I don’t deal well with change and what would spring be without an epic Sharks collapse.

…that Mark Letestu has very quickly become one of the most exciting Penguins prospects. There is a little bit of Jordan Staal in that kid and he looked great filling in on Tuesday night for the MANSTER himself.

…that if I didn’t see the game summaries on a nightly basis, I wouldn’t realize that Ruslan Fedotenko, Tyler Kennedy or Alexei Ponikarovsky were still on the Penguins roster. They have all been COLD AS ICE!

…that the Ponikarovsky deal is quickly looking like one of Ray Shero’s first duds…especially when you consider that it cost him Luca Caputi. Even more unsettling is the fact the Brian Burke gave Lee Stempniak away right as the deadline hit for a fourth round pick. Stempniak went on to score 14 goals in 18 regular season games with the Yotes, though Ponikarovsky’s one playoff goal tops Stempniak’s post season performance.

…that the best trade Ray Shero didn’t make was one for Raffi Torres. How did that one work out Buffalo? Still don’t understand why he was in such high demand…he is not a top six player and the fact that he was made a healthy scratch and replaced by Nathan Gerbe sums it up.

…that the insurance company pitch-mascots are getting out of control. I want to destroy the “World’s Greatest Spokesman! However, I still dig any Gecko or Caveman commercial that doesn’t involve the Washington Capitals and Flo has worked hard to steal my heard over the past two years. She had me at calculator humor.

…that if you haven’t seen the awesome ”Black Aces Hockey Club” shirts that Kick Save Design is selling, you are missing out! Buy one!

…that if you haven’t taken part in one of the chats that I host for Versus.com during their game broadcasts on most weeknights, you should! We have had some great, insightful, intelligent and respectful hockey talk going on. Special guests such as Adrian Dater pop up from time to time…AD broke some interesting news on Wednesday night saying that the Avalanche were mighty close to acquiring Jaro Halak last year at the deadline. Yep, the same kid that is doing a brick wall impersonation for the Habs. 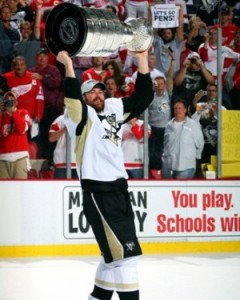 …that Hal Gill has teamed with Josh Gorges to bring you shut-down duo 2.0! The work of those two players in the last two series is on par with what Gill and the “Piece “did last year.

…that we can’t mention the “Piece” without congratulating him on the Kings success this season. He played his role to a tee and helped get them into the playoffs. Scuds was just as steady and effective as ever…he is sure to be a big part of a long run over the next couple years with that team.

…that we can’t mention the Kings without talking about Drew Doughy. What a special player that kid is…I never dreamed that he would make such a big impact so early in his career. He could win a friggin Norris Trophy… THIS YEAR. He had an amazing year and an even more amazing playoff.

…that I am thrilled that one of my all time favorites, Bret Michaels, is set to make a full recover from his brain hemorrhage. Those of you who know me know that I was more than a bit shaken by the news of the hemorrhage and feared the worst… Bret has been released from the hospital and is resting at his home in Arizona.

…that the people of Phoenix have got to dying. We came close to losing our hockey team on a number of occasions here in Pittsburgh and it feels like you are losing a family member. Hopefully things fall into place for you Yotes fanatics.

…that if you have ever dreamed of doing basic pre-game previews or post game wrap-ups, you should drop me a line with a sample of your writing.

…that Tukka Rask was once traded for Andre Raycroft — Seriously.

…that the Devils should allow Ilya Kovalchuk to walk. The trade didn’t make much sense when it happened and it still doesn’t make sense now. Bobby Holik agrees with me according to his comments on NHL Live a week ago. It was a square peg in a round hole situation.

…that Nik Bergfors and Johnny Oduya will be major contributors for the Thrashers next season and they will make the playoffs. 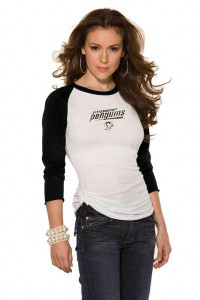 …that I am thrilled to see my childhood sweetheart, Alyssa Milano, back on television. She acts like she doesn’t know me…but I know different! I watched a lot of “Who’s the Boss” and still have that great poster of her in the New Jersey Devils jersey somewhere in my archives!

…that Henrik Lundqvist should ask for a trade…all the guy does is post sub 2.00 goals against averages and lose, because his team cannot score him any goals. It is a shame. I still think he would be the ticket to the Canucks long term success with the rest of Team Sweden.

…that yes, the above comment means I still have no faith in Roberto Luongo. Luongo has won only one big game in his career and it was this year’s Gold Medal contest against the USA. He was pretty shaky in that one and probably only won it because he was facing another guy that has never won the big one — Ryan Miller. (Oops, controversial statement!) Just saying…

…that you shouldn’t get all angry…Miller will get his, he is to good not to.

…that the Flyers have shown that they can be a very dangerous team when they are healthy and get consistent goaltending… one need look no further than round one for proof of that. Hey Tim Thomas…how do you look in orange and black??

…that I wonder if Calgary still thinks signing Jay Bouwmeester was a good move. Sure, Jay is great, but it sort of looks like scoring goals could have been the problem, not so much stopping them.

…that if I am the Edmonton Oilers I am drafting Tyler Seguin. Just saying…

…that the “It’s a Piece of Junk” kid from the Ally Banking commercial that aired incessantly during the Trade Centre show on TSN this past deadline is amazing! I cannot get enough of “It’s a piece of junk!” Best commercial ever!

…that my friend Pat has Bill Guerin’s lower face. He and Guerin were separated at birth…at least from the nose down. I need to post a picture for your review…an amazing likeness down to the goofy grin and stubble!

…that I would hate to be involved with the Russian National Team at any level if their World Championship team comes up empty.

…that the Empire Strikes Back turns 30 this month…boy do I feel old. However, it did prompt College Humor to come up with this amazing Jay Z knock-off video “Galactic Empire State of Mind”

…that I am completely jazzified that their is a new Danzig album being released on June 22nd!

…that I haven’t given you guys a playlist since we launched FTP either, so here goes…(First ten out of the shoot on a random shuffle on the briPod)

…that I hope you enjoy reading this as much as I did writing it.