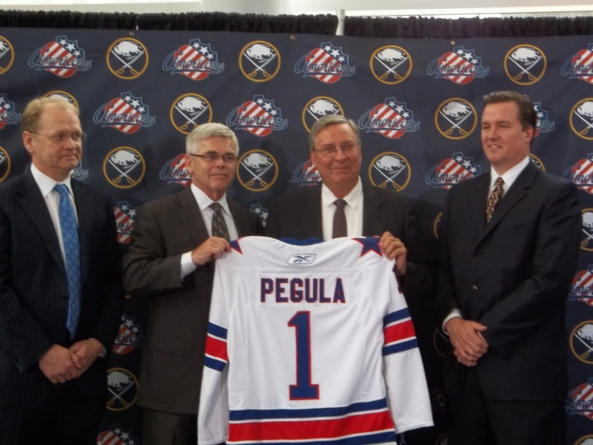 I went to the Sabres/Americans press conference yesterday. It was interesting to say the least. I went looking for information and I went as a hockey fan. As a resident of a Western NY city that has seen better days, this press conference was the ray of light that had been desperately needed. Upon entering the event, there was a buzz in the air, even more lively than most games in Blue Cross Arena this season.

While some folks were fine with the Florida Panthers as the parent club, this season was clearly definitive that it wasn’t working. The general populace here hasn’t been buying it for some time. I have to give a huge amount of credit to Curt Styres and Ted Nolan, together they made a bad situation work and kept the Rochester Americans right where they belong. Terry Pegula addressed this very fact and was gracious enough to acknowledge them openly regarding this very fact.  I would also thank them for their efforts when you consider that Western NY has had some seriously rough economic times in the past 15 years.

I didn’t walk away from this press conference feeling anything but confidence in the Sabres new ownership and their plans moving forward.

I lived here long enough to have seen the previous relationship between these two teams. This definitely feels like something new and different, but that’s because it is. I had a joke regarding dating your ex-girlfriend’s hot supermodel sister but…..that’s pretty much what it is right now.

Some have complained about minor things such as not discussing the Calder Cup, the Sabres wanting to put a patch on Rochester’s jerseys… it’s minor considering the players Florida gave, granted seeing Alexander Salak and Jakob Markstrom was actually pretty cool. For crying out loud, MANY people had to look up Evgeni Dadonov when he was selected for NHL the All-Star Game. The Sabres are bringing talent, guidance and being proactive in resurrecting something good and making it great. We just have to give it time.

This being more of a Pens”centric” sight, perhaps I should consider doing more Buffalo material moving into next season. It could happen and don’t mind doing it. For what it’s worth, Terry Pegula has me sold on the changes being made, and for that I can’t wait for some great hockey to match the growing buzz in Western NY. 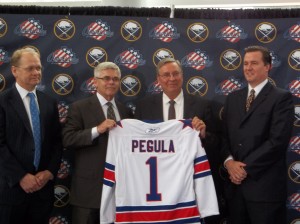