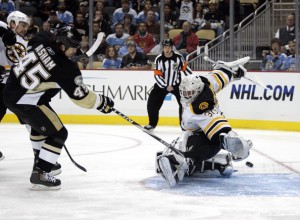 Earlier today I speculated that the Penguins may be using Arron Asham as a fall back to Mike Rupp and that appears to be the case as they have re-upped the forward to a one year deal.

I am sort of glad to see Asham coming back, as he was one of the Penguins best performers during their first round playoff loss to the Tampa Bay Lightning and he has a strong desire to win.

“I just want to win the Cup so bad that I just elevate my game,” Asham said during that series.

That is good enough for me.

That is also good enough for me… that is a great cap number for a guy who is capable of playing in many different situations. He can kill penalties, play third or fourth line minutes and even fill in on your top six for a shift here or there.

Hopefully Asham will have better luck staying healthy this season, as he was another Penguin who was afflicted with a concussion. If he is able to stay on the ice, he should be a great get for $775,000.

The Pittsburgh Penguins have agreed to terms with forward Arron Asham on a one-year contract, it was announced today by executive vice president and general manager Ray Shero.

Asham, 33, recently completed his first season with the Penguins. The veteran winger was one of Pittsburgh’s top performers during the postseason, leading the team with three goals and tying for the team lead with four points in seven games.

During the regular season, the Portage La Prairie, MB native appeared in 44 contests, notching five goals, six assists and 11 points after originally signing as a free agent with Pittsburgh on August 20, 2010.

Prior to joining Pittsburgh, Asham spent his first 10 seasons playing for Montreal, NY Islanders, New Jersey and Philadelphia after being selected by Montreal in the third round (71st overall) of the 1996 NHL Entry Draft. Heading into this season, Asham has amassed 190 career points (87G-103A) and 864 penalty minutes in 692 regular-season games. He has added 17 points (9G-8A) in 59 postseason contests.

Before making his NHL debut with Montreal against the Penguins on Nov. 28, 1998, Asham spent four seasons with Red Deer of the Western Hockey League (WHL). In 266 career games with the Rebels, he posted 131 goals, 161 assists and 292 points.