It was a unanimous vote by the AHL Board of Governors to allow the Rochester Americans to be sold to Terry Pegula and the Buffalo Sabres. It had been rumored for sometime now that this was going to occur, but life in Western New York is generally used to disappointment on many levels. That’s not a shot, just a fact.

I moved to Rochester from Pittsburgh many moons ago, and there was an interesting adjustment to getting used to AHL hockey when you’ve been raised in an NHL city. One of things that was a great compensation was being less than an hour out of Buffalo and having their farm club in your backyard. Pittsburgh has had quite a history with farm club affiliates before Wilkes-Barre/Scranton came along.

Yes, the club shared by the Penguins AND Capitals (fact), then Muskegeon, Cleveland and so on.  Trying to follow the Pens and their respective farm club history was laughable at best for a long time. I commonly reference the “shared” Skipjacks days because so many folks don’t realize that in this New* DC/Pittsburgh Rivalry and really, if you have the time, research that fiasco it’s quite entertaining.

My move to New York presented a new situation in which I could see players coming into the NHL via draft and minor league dealings. My local NHL market was less than an hour away, and their prospects were literally in my backyard. Consider this list of players that I have been able to watch since coming to NY:

That list is long enough but not a complete one by any means. It’s loaded with history, a few all stars and some Stanley Cup rings in that list. There is an unforgettable season in which Rob Ray and Wayne Van Dorp decimated just about everything in their respective paths, Ray with 446 to take the AHL record for PIMs in 88-89, long since surpassed by a few players (mind boggling to say the least). While I worked at Kodak back in the 90’s, I skipped work WITH my boss and a few coworkers to go see Game 7 of the Calder Cup Finals: 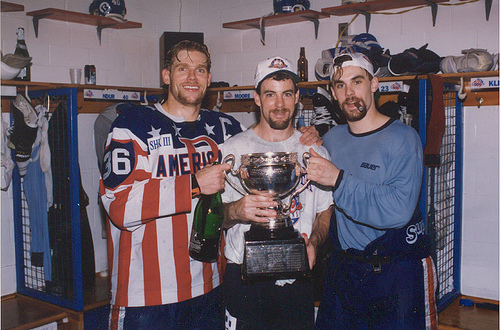 The ironic part is that Rochester would beat Portland for the Calder Cup that year. Yes, Portland, the most recent Buffalo Sabres affiliate.  A few years later I would see the Amerks lose the Calder Cup Finals on home ice to the Hartford Wolfpack.  There was history and passion here in Western NY and much of it was due to the relationship between Buffalo and Rochester.

Depending on what story  was told, the relationship went sour starting with the Rigas family’s indiscretions which was pretty significantly damaging when you consider how long the Buffalo Bills have been floundering. Incoming “savior”, Tom Golisano stepped in to “save” the Sabres. I think there are many of us wondering what his motivation was for doing it, I’ve always felt comfortable with understanding his political aspirations here in NY. From there, it became a pissing contest between team ownerships, the Amerks would eventually be bought by Curt Styres but too late to save the broken relationship here in NY.  The crazy path would have Portland become the Sabres affiliate and the Amerks would become the affiliate of the Florida Panthers.

Let me tell you, it was the difference between night and day as far as the atmosphere around here was concerned. Consider a community in NY trying to familiarize themselves with a roster of players of an NHL that is largely considered a joke for 15 years now. Some folks did it, but attendance plummeted. It wasn’t “our” team anymore, at least, it didn’t feel that way. I found myself going to more RIT games over the past few years than Amerks games.

This all changes today, my Facebook feed is loaded with local excitement. I’m actually pretty excited. The past may be the past, but with Buffalo having a sincere owner in Terry Pegula, there is definite hope in Western NY and it CAN be felt.

I cannot deny my love of the Pittsburgh Penguins, after all, it is where I grew up but this is something that I enjoyed being a part of before and I am really excited to see it all again. That’s no understatement, I fully intend on following the Buffalo Sabres/Rochester Americans even more next season, well except for a few notable games (wink, wink).