Al Willig is back with a “mid-point” look at his Ottawa Senators. He revisits some predictions he made and looks at where they are currently situated in the Eastern Conference pack.

The Senators sit in the sixth spot of the Eastern conference after the all-star break.   The season has been a roller coaster as the team started off with 1 win and 5 losses.  They also had a run of 20 wins and 12 losses before losing their last 4 games.  Such are the vagaries of a re-building team.  That they managed to win 20 games in that stretch is the amazing part and it was not all against the “also rans” of the league.  The streak included wins over Pittsburgh (twice), New Jersey, Philadelphia, NY Rangers and San Jose.

This team was not supposed to be sniffing the scent of a playoff spot if the prognosticators were to be believed, including Yours Truly.  Before the season started, I said “The predictions for the Ottawa Senators (by credible sources) have ranged from them finishing anywhere from 11th to 15th in the Eastern Conference.  Those predictions are founded in reality; to expect better would simply be the ramblings of pie-eyed, die-hard Senators fans.  For them to finish better than 11th, one would have to expect fully 18 players to exceed expectations.” 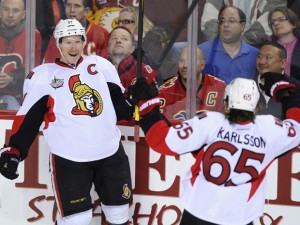 The Senators made it all the way to 4th in the East before I finally admitted that it was possible they would make the playoffs.  Seriously!  That is how bought into the notion of ‘rebuilding teams are bad’ I was… and still am, to some extent. To put it mildly and by any measure, the Senators have exceeded expectations.  The main reason and biggest contributor to the Senators “overachieving” as outlined above, is the addition of Paul MacLean behind the bench. If Ken Hitchcock was not enough evidence of the difference a coach can make, look no further than Paul MacLean.  Bryan Murray’s record of hiring coaches would generously be described as ‘icky’.  John Paddock was further evidence that hiring an incumbent assistant coach to replace the head coach is a bad idea.  Craig Hartsburg wounded the team with his low energy practices and lack of accountability and Cory Clouston twisted the dagger into a dying club with his unexplained and indefensible personnel decisions.  But Murray finally got it right with Paul MacLean.  He removed the dagger, healed the patient and made the team strong with clear communication, high tempo practices and attacking style….and what a mustache!!(check check and check).  Cowen has really been a revelation.  He is already the tough, steady defensive force at age 20 that I had hoped he’d be at 23 and he has offensive instincts that will grow with time.  This kid is only going to get better and while some of us Senators fans will never really forget Zdeno Chara, Cowen certainly can take the hard edge off those memories.  Add to all of this a return to form of Sergei Gonchar as well as Filip Kuba playing for his next contract and you have the makings of something extraordinary.  The cherry on the cheesecake has been the offensive explosion of Erik Karlsson.  His numbers are no accident.  Welcome back to the league, Paul Coffey.

That’s the good news.  Here is why I am still not convinced the Senators are a playoff team; 4 game losing skid notwithstanding.

They have played the most games in the NHL and fully 5 more than Florida who sits in ninth only 5 points back. So, their hold on a playoff position is tenuous at best given the games in hand every other team in the East enjoys. The team is putting a positive spin on this by saying the additional practice they will have in comparison to their competitors will serve them well.  But, one might wonder why the reverse was not true in the first half of the season. 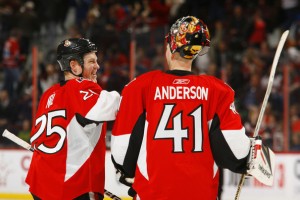 Some will say that 2 points in November is the same as 2 points in March. However, anyone who has watched the NHL closely knows the effort needed to gain those 2 points is not the same in November as it is in March.  I think it is fair to suggest that some teams may have taken the ‘lowly’ Senators lightly based on the preseason press and a lineup half full of names they did not know.  Lastly, the team has dropped 4 straight games and in every one, the Ottawa press and their fans have complained somewhat bitterly that the team was done in by shoddy referees.  I am not here to debate whether or not that is the case.  There is a good argument to be made that when the most penalized team in the league (Boston) is not called for a single minor penalty in a game, that something smells like newspaper previously housing a piece of cod.  And, the same team of referees was working 3 of the games in the skid.  And one of the referees openly exclaims he made a penalty call against Erik Karlsson because Karlsson is “a known diver” when the fact is that Karlsson had been called for one diving penalty in the previous 200 odd games.

My point in mentioning this is to also mention that the Senators have played 28 one goal games.  Adversity such as this; bad calls, non-calls or bad breaks in general tend to have a bigger effect on the marginal teams and I think it is fair to put the Senators in this category.  The elite teams; teams that regularly go deep in the playoffs, often put themselves in a position where bad breaks do not affect the outcome of games.   It is also fair to acknowledge that the Senators were the beneficiaries of good breaks in their run of games that produced 20 wins.  It is a well known axiom that breaks even out over the course of the season and that seems to be happening for the worse for the Senators at this point in the season.

Lastly, the Senators are still a very young and inexperienced team.  They have 8 regulars with 3 years of NHL experience or less.  There are certainly exceptions and sometimes teams can limit the impact of 1 or 2 inexperienced players down the stretch but there is no way to limit that exposure when half your lineup is young.  The Senators will live and die with youngsters playing key minutes in crucial games and situations.  It is an awful lot to ask and my expectations are that it will catch up with the team as the games become more meaningful.  I hope I am wrong.