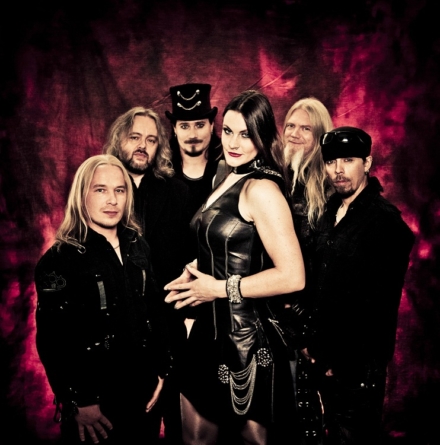 Music is a passion of mine. No, I do not play an instrument and I am not in a band but I believe that music is what keeps me sane. Back in 2004 I was very jaded and dis-enchanted with the music scene in North America and I saw no end to those feelings. There was nothing that grabbed me, nothing that felt fresh or new….until Nightwish.

I never imagined that a band from Finland that played in a symphonic metal style with a classically trained vocalist would change my world.

Even though the band has gone through some changes since it’s inception by having two previous vocalists depart, it may be the strongest that it has ever been musically and personnel wise. The original singer, Tarja Turunen, was let go after there was a falling out between she and the rest of the band. Tarja is a classically trained opera singer who has a tremendous voice. Her stage presence as the front woman for the band was limited but she more than made up for it with the amazing vocals she was able to produce. Tarja was released from her commitment to the band via an open letter that was posted on Nightwish’s website.

Wish I Had An Angel (With Tarja Turunen)

For their next album, Nightwish brought in a vocalist that was a complete contrast to what Turunen brought to the line up. Relatively unknown Anette Olzon from Sweden lacked the powerful voice of the woman she replaced but brought a true rock and roll swagger to the band. Her singing style was more traditional rock and roll with limited range but she was a true ringmaster of the festivities as a natural front woman. The fan base became splintered at this point as there were those who were die hard Tarja fans and then there were the people who embraced Anette.

The year 2012 was a huge year for Nightwish in more than one way. Their latest album, Imaginaerum, was released and was near the top of the charts world wide. It was also during the tour for Imaginaerum that there were issues between Olzon and the band mid tour. This could have been a tremendous disaster for the band and could have damaged Nightwish greatly.

Band founder, main songwriter and keyboard player Tuomas Holopainen did have  an option however, as he called in Dutch vocalist Floor Jansen to fill the void and continue the tour. Jansen’s addition to the band, even though it is said to be only temporary, galvanized the band and fans. She may not have the same powerful voice as Turunen, but it is much more powerful than Olzon’s. This allowed Nightwish to play some songs from the back catalog that they couldn’t with Olzon. She also is just as much a great front woman as Olzon and was completely comfortable with interacting with an audience that was not sure what the future of their favorite band would be.

I Want My Tears Back (With Floor Jansen)

Nightwish, now with Floor Jansen belting out the songs, may be stronger than at any point in their history. The fan base has been united with the addition of the Dutch Goddess to the band and Nightwish has what is was needing. A strong vocalist who could perform the entire catalogue of songs and a front woman who has a rock n roll aura about her. Her vocals meld beautifully with bass player and male vocalist Marco Hietala and you can see how they have fun singing songs together.

This band opened the door to a new world of amazing music for me. I was able to discover bands from Europe like Tarot, Lordi, Delain, Pain and Free Spirit. I had never heard anything like them before and they rejuvenated my love of music. Give them a chance and thank me later.