Well, we are nearing the end of August and camps are still roughly a month away. I figured that this period of down time was a great opportunity to break out one of my most personal blogs…

Well, we are nearing the end of August and camps are still roughly a month away. I figured that this period of down time was a great opportunity to break out one of my most personal blogs – A gift from my father.

I originally wrote this blog a few years back, but it has always been one of my favorites. As I said, it is very personal and it sort of gave me an outlet to get some feelings off of my chest. It also helped me realize that my dad is a huge reason why I even began following the game. Hockey was a great way for us to bond a bit, even though other things weren’t going all that great in our relationship.

I have been waiting for the right time to “christen” my new home with it, but didn’t want to do it during the season or playoffs. But there was no way that I wasn’t going to eventually post this here at From the Point. It is a blog that is important to me and I wanted it to be here in my own archives. Just seemed like the right thing to do.

A Gift from My Father

My father and I didn’t have the greatest relationship over the years; however I did build one with him during his fight with cancer throughout 2007. In doing so I did a lot of forgiving and forgetting…I also came to one conclusion… My father gave me one of the greatest gifts I had ever received…the game of hockey.

That is right…something that has been so important to me since I was 9 years old was passed on by my father. Over the years, my love of the game continued to progress and I never sat back and realized that the whole reason I started to love it in the first place was my dad.

He had given me something that would become like a family member to me…a living breathing thing that I could play, watch, talk about incessantly and eventually write and pontificate about pseudo professionally.

I came to this conclusion through a lot of soul searching, praying about and questioning what the heck had happened over the last 15 months. Why did my dad have to get sick, what made him come back into my life and where the heck are we at today?

I looked back at my childhood and the times that I actually did spend with my dad. Most of them seemed to revolve around this great game that we all love so much…the game that has become such a big part of me.

It all started back in the early 1980’s…1983 to be exact. My parents separated and I had to spend weekends at my dad’s house. He didn’t have cable television or much else to entertain an 8 year old. So I spent a lot of time going through my dad’s things and stumbled across his old hockey equipment. It turns out that he used to play a lot in his younger days. He and his friends would gather on winter afternoons in Highland Park in the Pittsburgh area to skate and play on a frozen lake there. They would play hockey for hours and he shared all of his favorite stories with me. 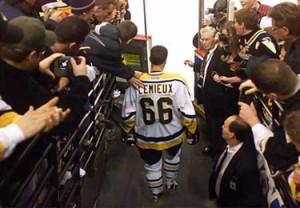 The constant talking about his hockey hey days got him fired up about something that was a pretty big part of his teens and early 20’s. That in turn made him want to spend more time teaching me the game…this also happened to coincide with the Penguins drafting Mario Lemieux. (Who readers of this blog will realize is my all time hockey idol)

During this time the Penguins games were being shown on a local television station called WPGH 53, which was thankfully one of the stations my dad could get. We spent countless hours watching the games of the 84-85 season…all the while focusing on the Penguins new superstar.

When the games weren’t available on television, we would be listening to them on my grandmother’s small transistor radio. That is where we listened to Mario score 5 goals, 5 different ways against the New Jersey Devils on New Year’s Eve 1988.

My dad let me use his hockey equipment as I started to play the game. He had old leather red and white gloves…they were pretty much identical to the ones I remember seeing Gordie Howe wearing in pictures. He also had shin guards to match…leather, with cloth bands to hold them on. I would parade around in these all the time.

I will never forget my first hockey stick; it was a horrible mylec street hockey stick with a screw on plastic blade. I only say that it was horrible, because I would never dream of using one of them today…but it did the trick. We would pass a hockey ball back and forth in his back yard which was made of cobblestone and brick. The ball would bounce all over the place, which really helped generate some great hand eye coordination!

Things progressed from there…he bought me a table hockey game that we would play for hours. I would name all of the players on the board…of course I had the all Penguins in my line-up and my dad would have some other random Patrick Division opponent. I would keep track of the statistics…even awarding assists to my wingers who would spin passes into the slot where my “Lemieuxesque” center would ram home goal after goal, since my dad hadn’t master the art of working the goalie.

I don’t exactly remember all of the details of my first live NHL game, but I do know that my dad and a couple others took my Cub Scout pack to see the Pens face off against the Blackhawks in or around Lemieux’s first season…I don’t remember a lot because we didn’t get to see much of the game. I remember someone getting sick and we all had to leave because the dad’s weren’t exactly thrilled at the prospect of dealing with a sick child that wasn’t their own.

Though that first experience didn’t go so well, the Wayner, as we affectionately call him these days, did get me back to the Civic Arena for a game. He surprised the heck out of me and bought tickets to Game 1 against the New York Rangers during the 88-89 post-season. The Penguins hadn’t made the playoffs in a long while and were turning into an exciting team…the city was a buzz to see their flightless water fowl take the first of many Stanley Cup Playoff steps. The Pens came out flying and blew Guy LaFleur and the boys in blue out of the Mellon Arena 3-1. The Penguins swept the Rangers in that series, but I would never forget that game and the way my dad and I cheered the “Doctor” (Paul Coffey), Tommy B and Le Magnifique that evening.

It seems that hockey was one of the only things we had to talk about. As I mentioned, it wasn’t the greatest of situations, but when we were talking about or playing hockey it turned into a couple of guys bonding over a game. We went to a lot more games throughout the late 80’s and early 90’s until eventually hockey wasn’t enough to keep us together.

I ran with it…it had become something bigger to me…something that was the “be all end all” of my day. The thing that I used to share with my dad became the thing that brought me together with friends and teammates. The thing that made me pursue writing about the game and becoming part of the great internet hockey community.

The great moments in hockey with my dad began to dry up and the last one of significance during my “childhood” was the Cup clinching game against the Chicago Blackhawks. He came to my house and watched the game with my mom, a friend and I. 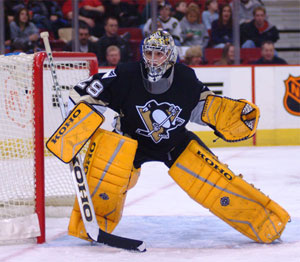 From there, I didn’t watch another hockey game with my dad until I reached out to him and sort of forced him to go and see Marc Andre Fleury’s first NHL game. We sat in my season seats up in section E28 of the now Mellon Arena and saw the young flower bloom. Sure he lost 3-0, but he was amazing. I can still hear my dad marveling at “how fast he was” and “how we needed to stay in touch and do this more often.” That was October 10, 2003.

Unfortunately I didn’t have another meaningful conversation with my father until January 29, 2007. He was calling to tell me that he had been admitted to Shadyside hospital with what was either a hernia or a tumor. Unfortunately it was the latter, but I spoke to or saw my dad almost every day between then and his death on December 1, 2007. We reminisced a lot about the things I shared with you above and built a relationship that seemed to evade us like a Mario Lemieux slap shot for close to 20 years.

Ironically one of the last times that I saw my dad and got to spend some meaningful time with him where he was able to communicate and enjoy himself was watching a hockey game. I decided that I would take a night off from going down to cover the game and my girlfriend and I sat at the Wayner’s bedside as the three of us watched the Penguins beat the Atlanta Thrashers 5-0 one week before he passed.

So, I guess what I am really trying to say with this blog is that for years I complained about how little my dad had done for me. How he just wasn’t there when I really needed him and how he mustn’t care, when the whole time, the one thing that I relished – was the one thing he had given me. He introduced me to a game that has played a bigger role in my life than any hobby, sport, book, lesson or schooling ever could have. And for that…I thank you Dad.

What a wonderful gift I have received from my father…