As I was putting the last blog together, I started to think of what Sergei Gonchar actually means to this team. When it comes down to it, he has been one of the most important players on the team.

As I was putting the last blog together, I started to think of what Sergei Gonchar actually means to this team. When it comes down to it, he has been one of the most important players on the roster. Once you get past the Crosbys, Malkins, Staals and Fleurys of the world, it really is a rare player who has had as much an impact on and off of the ice for the Penguins.

Gonchar has been a steadying influence in the locker room, on the power play and just about everywhere else. He is sort of like the pap of the team… the guy who sat quietly sipping his black coffee through even the most harrowing moments of the last five years. His calming influence kept the team from losing their composure during plenty of rough patches and while the pressure was at its highest during the Stanley Cup Playoffs. 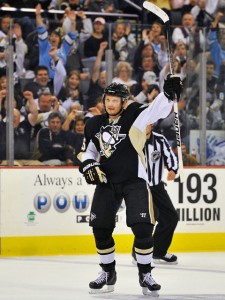 Sarge was also a great person to have around when the team went all cloak and dagger in helping to bring Evgeni Malkin to the National Hockey League. Who knows how long it might have taken Geno Machino to make his mark had he not had his big brother to lean on. The Gonchar’s took Malkin in, made him a part of their family and made his transition a very smooth one.

All that aside, the one area that the Birds will end up missing Gonchar the most (if he leaves) is on the ice. He was and still is one of the most offensively gifted defensemen in the National Hockey League… heck, we might as well say world, as he has done it on the international stage as well. All he does is throw up 60 plus points a season. He plays on the power play, he kills penalties, and he honed his work in the defensive zone and became a 25 minute player.

Sarge was always there with a smile and a humble nod… it didn’t matter if he had just walked by you in the locker room or had just buried another of his patented one timers from center point. No matter what happens over the next 17 hours, Gonchar will always be one of my favorite players. I followed his career before he got to Pittsburgh and I will continue to do so as he really made a positive impression on me during his time in town.

All of this isn’t to say that I am convinced that he is a goner, but I felt obligated to point out the good that he has done while serving diligently as the greybearded QB on the Penguins blue line.

A look at the numbers…

Mr. Consistent posted another 44 points (7G-37A) in 60 playoff games. Good for .73 points per game. Keep in mind that total might have been higher had he not skated on one leg for 12 games en route to the Penguins Stanley Cup Championship two years back.

If the numbers don’t do it for you, enjoy these Sarge vids…